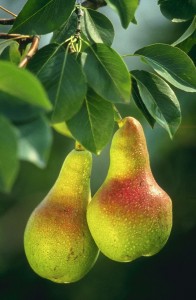 The Talmud (Taanis 8b) instructs us that when a person enters the barn to measure the new grain crop he should say the blessing: May it be Your will Lord our God, that You send blessing on the work of our hands. Then he begins to measure and says: Blessed be He who sends blessing into this pile of grain.

But if the person first measured the grain and only then recited the blessing, then his prayer is in vain. That’s because blessing can’t be found in something that’s already weighed out, measured or counted, but only in something hidden, something not yet assessed, or which the eye cannot see.

The concept of hiding what is precious to us until the appropriate season (time and place) when it is ready to blossom and fruit, is a concept that permeates the Jewish way of life. A baby is hidden inside her mother until it’s time to be born. A soul mate remains undetectable until the time is ripe to meet. Our spiritual treasures are guarded until they are ripe for revelation.

Tu B’Shevat, the New Year of the Trees, begins tonight, Tuesday, February 3 and lasts until sundown tomorrow. Tu B’Shevat is also the birthday (in 1780) of Reb Nosson, Rebbe Nachman’s foremost student and scribe. The Rebbe tells us that without the careful recording of his work by Reb Noson, his beloved “Nosseleh”, his world-changing teachings would never have seen the light of day. Reb Nosson’s entire life was devoted to bringing the Rebbe’s “fruit” to the world.

Tu B’Shevat is one of the only Jewish holidays that isn’t mentioned in Advice (Likutey Eitzos), the collected advice of Rebbe Nachman compiled by Reb Nosson. But Reb Nosson himself mentions Tu B’Shevat in Likutey Halachos. He states that Tu B’Shevat is always adjacent to Shabbos Shira

Song at the Sea

Shabbos Shira is the Shabbos of the Song, when we read the Torah portion Beshalach in which Moshe and the Children of Israel sang a special song of praise and gratitude after the miracle of the splitting of the sea. We recite this song each morning in our prayers, and there are many benefits to be conferred on those who recite it with kavannah (focused intent.)

In the Song at the Sea the Children of Israel thank Hashem in great detail for the miracles they had witnessed, the ones He just performed. They, and we, praise and thank Hashem for His glorious triumph, for tossing the murderous pursuers and their chariots into the sea, for bringing his people through safely on dry land, and so on. The whole world knew of His Glory, for the midrash tells us that all the waters of the world split, but the Children of Israel were the ones to proclaim it.

The song at the sea is not only about something that occurred previously. It also praises Hashem for an event yet to occur, that of Hashem planting His people on the mountain of His inheritance. After thanking Hashem for the splitting of the sea, the Children of Israel then demonstrated their emunah, their faith, by singing of the blessings Hashem promised to give them in future.

During Tu B’Shevat, future blessings are hidden from us, just as the early stirrings of sap in the trees are hidden from our senses. But tonight we will spread our table with a bountiful variety of fruits, say the blessing on fruit as well as the shechechiayanu blessing, the one we say in gratitude for reaching a new turning point or special occasion. Tu B’Shevat marks the promise of a forthcoming fruit crop of the trees, as well as the ending of the old  and the beginning of the new year for trees.

It is a powerful night of emunah and a night that reminds us that Hashem’s blessings will come to fruition, even if we can’t yet sense them. Hang in there.

What Does Fasting On Yom Kippur Accomplish?

Prepare in Elul for Rosh Hashana and Yom...

Yom Kippur – A Day Of Love

Next Year Will Be Different

How to Learn Likutey Moharan