It’s so exciting to be starting a new series for Breslov.org specifically focused on incorporating Rebbe Nachman’s teachings into our lives as women. There were so many possible paths to take that it was hard to settle on a single thread to follow as a guideline. But, in the end, I decided to follow the Rebbe’s own instructions to Reb Nosson when it came time to publish his wondrous stories, the thirteen tales of Sippurei Maasiot. Rebbe Nachman told Reb Nosson that they should be printed in Hebrew up above, with Yiddish translation down below, in order that women should be able to read them, since they are a segulah for fertility—for “waking up the sleeping” or dormant spiritual self. (LM I:60).

The tale of the Sophisticate and the Simpleton is so filled with life wisdom that we can apply every single day, I’ve decided to begin there, even though it’s the ninth story, because it’s nearly unique in having a straightforward narrative that doesn’t require deep knowledge of Kabbalistic allegory in order to glean practical advice.

There were once two homeowners who lived in the same city. They were very, very wealthy, and they had large mansions. Each one had one son, both of whom studied in the same school. One of these sons had deep understanding and was quite sophisticated. The other one was simple; he was not lacking in intelligence, but had a straightforward, humble approach, without any sophistication. These two sons loved each other very much, even though one was sophisticated, while the other was simple, with a very humble mind. Nevertheless, they loved each other very much…

So, for this week, we want to be attentive to the way in which there are two householders in the small city of ourselves, and both of them have a son, and both are wealthy and own large houses. Each of us possesses and inner sophisticate and an inner simpleton, and they have an effect on every aspect of our lives. They have their say in the way that we interpret the words and actions of others, in the way that we see ourselves, in all of our relationships, including our relationship with ourselves and it G-d. 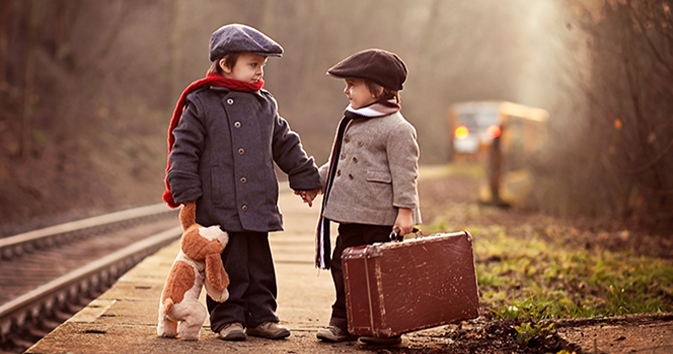 These two sons loved each other very much, even though one was sophisticated, while the other was simple…

The two come from families with great resources at their disposal, and they begin their existence in a state of harmony and mutual love, which points forward to the fact that they really do have it in them to co-exist peacefully and constructively. My sophisticate self and my simple self don’t have to be in conflict with each other—the fact is that they started off “learning in the same school”—in the same cheder, which can also be read as “room,” which is also the womb. Both sophisticate and simpleton are just different parts of myself, originally one, but as the story will demonstrate, they wind up taking very different paths.

The sophisticate has a great talent for offering incisive critique, because of the sharpness of his mind. When Rebbe Nachman uses the term “chochom” to describe him, he does it with tongue in cheek. Is the sophisticate truly wise? No. He’s more like an “iberchochom”—a “too smart for his own good” type, and we’ll see that it’s his acumen that really gets him in trouble. This is why we translate chochom as “sophisticate”—because he’s pseudo-smart rather than wise, even though he’s sharp as can be.

Most of what unfolds in the story to come is really about the emotional and spiritual destructiveness of placing too much value on the voice of the inner sophisticate. And he’s contrasted with the simpleton, whom Rebbe Nachman immediately tells us is far from unintelligent. He just has a simple, humble, and straightforward approach to life. To be a person who can rejoice despite adversity, who has resilience against society’s pressures and insults, who can stay focused on his own story despite the temptation to be miserable through comparison to others apparent successes…is the simpleton really not the wiser friend?

But all of that is waiting for us as we work our way through the story, and follow the adventures of these two seemingly incompatible friends, who nevertheless love each other very much…who have it in them to live in harmony and mutual love.

For this week, I can ask myself: Am I able to identify my inner sophisticate and my inner simpleton?

The history of Jewish Meditation