We are sad to announce that Rabbi Moshe Burstein, one of the elders of Breslov has passed away. Here is a short bio about this great man, may his memory be a blessing for us all, Amen. 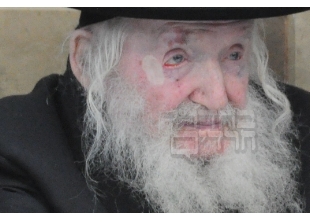 A leading figure in Breslov in Jerusalem, Reb Moshe was born in Poltosk, Poland and arrived in the Holy Land in 1935 with his wife and infant son. Moving to Jerusalem’s Jewish Quarter, he founded the daily Breslov minyan there. During the War of Independence (1948), he was held as a civilian hostage by the Jordanians along with eight other Breslovers. After his release, he was resettled in the Katamon section of Jerusalem, where he bought, rebuilt and administered the Breslover Synagogue. Reb Moshe was one of Reb Avraham Sternhartz’s closest disciples and was a ba’al tefilah in the Meron kibutz for Rosh HaShannah for many years. For fifty years he longed to be worthy of getting to Rebbe Nachman’s gravesite. When this finally happened, in the spring of 1988, he recited the Shehechiyanu Blessing.

Here is the report from the Israeli Chareidi news site B’Chadrei Chadarim: (free translation from Ivrit)

Tonight R’ Moshe collapsed in the Beit Midrash Ohr Avraham, D’ Chasidei Breslav in “Givat Moshe Neighborhood” in Jerusalem. After resuscitation, he was taken to Bikur Cholim hospital, where he returned to his creator.

When he was young, he studied at Novohrdok Yeshiva and was considered an  ‘ilui”/genius. Within the walls of the yeshiva he discovered Breslov and since has been attached to her heart and soul. The ‘fire’ of Rabbi Nachman, was burning in his soul all his life.

Reb Moshe z”l was personal friends with the Gaon Rabbi Meir Shapiro of Lublin z”l, founder of Daf Yomi – and prayed with him in the kibbutz of Breslov Hasidim held for many years at the yeshiva of Lublin (Chochmei Lublin) in Lublin city.

When he moved to Israel, he first lived in a house up in Haifa and then moved to the Jewish Quarter in Jerusalem.

He used to visit the Western Wall every day not less than 3 times. Tikkun Chatzot/Midnight Prayer, Shacharit and Mincha Ma’ariv.

In Independence Was, he was taken captive by the Jordanians. Later said: “They took us a few hundred people to the desolate desert. First Shabbos was that of the Bechukotai and we did not have with us a Torah scroll at all. ”

After nine months in captivity, he moved to the neighborhood of Katamon.

In recent decades he ran the Ohr Avraham Shul, D’Chasidei Breslov in Jerusalem, where he collapsed tonight.

At the Levaya they spoke of his sacrifice in moving to Eretz Yisrael in 1935 with his wife and infant son.  In spite of the starvation they went through he refused his family’s pleas to return to Poland. He did not leave Eretz Yisrael until Uman opened up for Rosh Hashanna in 1988.  Since then he spent every Rosh Hashanna there – including this year.

During the War of Independence in 1948 he spent 8 months in a Jordanian prison camp together with the other Jewish prisoners from the Old City.  He lived in Katamon after his return from captivity.

The night before he passed away he was too weak to attend the Bar Mitzvah of a grandchild.  He did, however, get up for Chatzos.  A grandson who checked on him in middle of the night found him sitting and learning Gemara Kiddushin.  He had begun Shas again last Shvat with the hope of making another Siyum and had already reached Kiddushin in less then a year.  Then he got up to daven Vasikin and spent the day learning and davening as he always did.  He davened Mincha and Maariv in his Shul in Gush 80 and danced in the Rikud after Maariv.  A few minutes later he collapsed in the Shul and passed away shortly afterwards in the hospital.

May he be a Meilitz Yosher for all of Klal Yisrael and an inspiration for all of us to become true Ovdei Hashem.

May we be zoche to Besuros Tovos.

BARUCH HASHEM MASTER OF MERCY RECIEVE THIS GREAT SOUL. AND CONSOLE FOR THE LOSS OF THE WONDERFULL MAN. MAY HE BE AT PEACE. BLESSINGS AND CONDOLENCE TO HIS FAMILY AND ALL ISRAEL. AMEN

Reb Noson’s most heartfelt desire! – An...