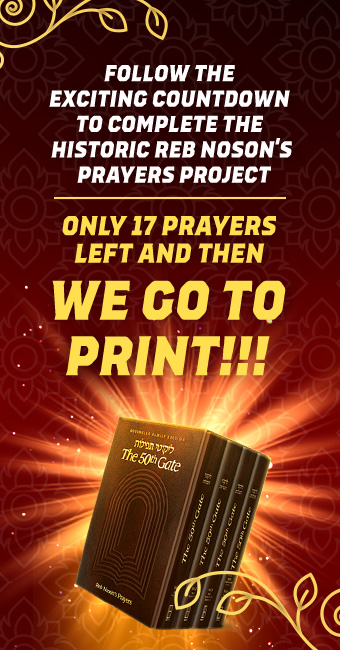 By ignoring your brother when he is in trouble, it is as if you were responsible for his misfortune.

A person should avoid inflicting pain upon living creatures, as this will bring him harm.

A person who doesn’t plead mercy for his friend falls into captivity. He can redeem himself by providing food for some living creature. —The Aleph Bet Book, Compassion and Pity, p. 218

Every person must fulfill this – [namely,] to have compassion on the Jewish people and to extricate them from sin; and to know and to make known that there is a God controlling the world and that there is no purpose or goal in the world other than to do God’s will—Kitzur Likutey Moharan, Part II, Lesson 7, p. 865

In order to understand what compassion is and why it’s one of the most important qualities a person can develop, we have to ask: Where does compassion come from? What is its source? Does it come from the ethical ideologies of the secular philosophers? No! The source of compassion is Hashem.

According to Rebbe Nachman, God created the world in order to show His compassion. Without the world and its many peoples, God could not have revealed His mercy and kindness. Hence, the entire process of Creation—from the highest spiritual realm to the center of the corporeal world—was undertaken in order for the compassion to become manifest (Likutey Moharan I, 64:1, based on the Etz Chaim from the ARI 1:2-3). The Rebbe continues with a discussion of kabbalistic teachings that state that Creation took place in order to reveal God’s compassion and His goodness to humanity. However, this compassion cannot be revealed unless God is recognized as its Source. –This Land Is My Land, BRI

There is so much love and compassion in the Rebbe’s teachings but the Rebbe’s compassion isn’t based on rationalizations, human logic, or even warm, fuzzy feelings; it’s clearly based on Torah and the sharing of Hashem’s compassion, brilliantly applied.

If we rely on the human mind which can construct impressive systems of ethics or morals (and which are built on what the Rebbe implies are merely stratagems) we open the door to not only atheism, but immorality in all its manifestations.  That’s because we are limited—we simply don’t have knowledge of the past, present and future and every human variable. It’s also easy to fool ourselves. That’s why we must view Hashem as the role model of compassion just as we must rely on the Torah to show us specifically how to implement our compassion.

Halacha, Divine law and Divinely given morals, never fail us. Never. Human-created systems of law, morals, or ethics? Not so much.

Compassion corresponds to Tiferes. Tiferes is both a midda, a character trait or quality, as well as one of the Kabbalistic sefiros. The sefiros can be described, partially, as pathways of Divine emanation. Each sefira helps us to relate to how Hashem manifests in our world.

In each situation that calls for our compassion, it is challenging to take the measure of how much Chesed and how much Gevurah we should use.   Sometimes we have insight into which should predominate, but most often if we rely on our own thinking it’s hit or miss. Unless we rely on Torah to guide us, we just don’t have enough information to make a good balance. If we don’t think about it, but just rely on our natural inclinations, we can be even more off the mark—our bias will prevail whether we’re aware of it or not. Or, we do what our bias inclines us to, and rationalize it with our logic.

However, the Torah and Rebbe Nachman emphasize that we should focus the majority of our most merciful compassion on our brothers and sisters, our fellow Jews. This does not mean we exclude our fellow countrymen, our fellow human beings, or even our fellow creatures such as animals or plants! It just means that this is the Torah’s prescribed order in which to act on our compassion.

Tanya, in Epistle Six, teaches that it’s important that compassion be in truth and that the way to be truthfully-compassionate is through the mitzvah of tzedakah (charity.)  Torah instructs us specifically how to give tzedekah by explaining, among other requirements, how much of our income we should give (a minimum of 10 percent, but 20 percent is even better, and more is good if you are wealthy) and how to give (if possible, before being asked and anonymously, and so on.)

Torah also tells us who we are obligated to give to and the order of importance: First on the list is to give charity (and to perform charitable actions) in order to redeem Jewish captives, for Jews languishing in prison and the like, and also to give charity to save lives. We should give to poor relatives, next. Then, we should assist Torah scholars and Jewish educational institutions and the poor, preferably in your own community or city first, though some say the poor who reside in Israel come first.

Then we can give to world at large, including for example, disaster-relief funds such as those for natural disasters or war or starvation. We are also not to discriminate if we’re directly asked—if anyone asks for charity, no matter their background, we must give, though we should pray that our tzedakah always goes to a worthy person and a worthy cause.

This and the many other rules of giving tzedakah are rooted in truthful compassion—after all, the literal translation of tzedakah isn’t really charity but justice. But, why do we redeem captives first, and Jewish captives at that? After all, each human life is precious to Hashem.

Perhaps by extending our personal compassion to free others, especially those most like us, we help free the captive neshama (soul) within ourselves. We are each of us exiled in some way from our true potential as long as the world remains in this un-redeemed state. Each effort we make to free a captive shows Hashem that we take exile personally.

Also, by relying, with simplicity and faith, on Torah to inform our compassionate deeds; by exercising our judgment within the framework of the halacha (Torah law), we rectify flawed compassion. It seems counter-intuitive—the Torah says that true compassion is compassion that is shown to those most like us, closest to us! Don’t most of us already do this? Isn’t this a natural predilection?

This self-destructive urge is not a new phenomenon. In fact, in a few places the Torah feels it’s necessary to warn us against showing compassion to those who would mislead or obliterate us if given the chance. For example, this week’s parsha, Re’Ey, elaborately exhorts us to not “…view [a false prophet] compassionately and do not take pity and do not cover for him.”(Deuteronomy 13:9).

Rebbe Nachman comments on the parsha. He points out that it’s forbidden to show compassion to a person who lacks da’as (higher awareness). Certainly, a false prophet falls into this category (so does someone who follows a secular ideology). But when a person gives charity properly and demonstrates proper compassion, he:  “will have compassion bestowed upon him” (Shabbos 151b). And since it is forbidden to show compassion to one who lacks da’as, he will be granted da’as as well. This means that he will be protected from sinning, since sin is associated with foolishness and a lack of da’as. –Rebbe Nachman’s Torah, Numbers-Deuteronomy, BRI.

Compassion begins at home. With your self (!), your spouse, your children, your parents, your siblings, your neighbors. If every person in the world, Jew and non-Jew, showed true compassion (mercy and pity blended with touches of restraint when called for) to those closest to them, starting with their own self, no one would lack.

Tisha B’Av—Mourning the Destruction of the Holy Temple

Rays of Hope – A Breslov Family...

What Women Seek in Uman