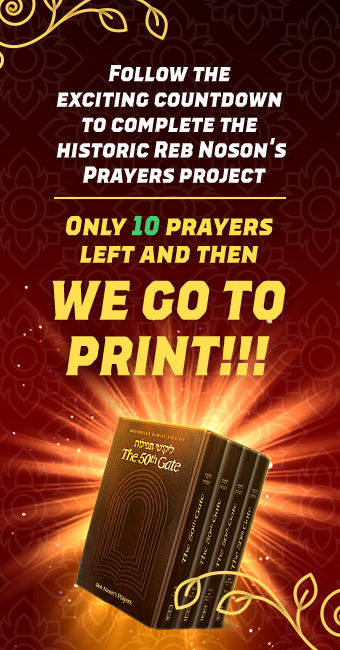 written by Chaya Rivka Zwolinski May 4, 2012

Anyone who needs other people for his livelihood—or even if he has his own livelihood, but he has a craving for honor and esteem, which is also a form of needing other people, since he needs their honor and esteem—such a person is liable to fall into great falsehood during prayer…[Even if] he is not a complete fraud and imposter—nevertheless, when he needs other people for something, it is extremely difficult for him to pray with absolute honesty and sincerity. –Likutey Moharan, Lesson 66 (BRI)

My mind is a turmoil of thoughts that sometimes border on madness. I am prone to the most ridiculous motives of wanting to impress people, and I get all kinds of ideas about my own importance, as You know. I am constantly having thoughts like these. They crowd in on me from every conceivable side, to the point that I cannot open my mouth and say a single word with true sincerity. –The Fiftieth Gate, Likutey Tefilot, Reb Noson’s Prayers, Prayer Number 10 (BRI)

Who is an honorable man? He who honors his fellow man…—Ben Zoma, Pirkei Avos

I watched the speaker stride proudly into the room. One of the audience members was seated near the podium and a few others were coming up to him and asking his advice in his area of expertise. The speaker walked over to him and said, “I didn’t know you were anybody.”

In Hashem’s eyes, each of us is somebody, whether or not the world sees it this way. (Would Hashem create a nobody?) One of our missions as Jews is to honor others yet not seek honor from others.

There’s a paradox with honor—giving it (appropriately) is healthy, seeking it is poison. By craving external validation, we damage our inner ability to validate ourselves. To validate ourselves, which we do by connecting with Hashem, we must spend time in prayer, including hisbodedus, what might be defined as “prayerful meditation.”

During all types of prayer (formal prayers and hisbodedus), we connect to Hashem with love and gratitude then we step back and evaluate ourselves and learn to see ourselves more objectively. Through this process we’re better prepared to sort through life’s many complex challenges and our response to them. Obviously, authentic, deep prayer is vital to our emotional well-being.

Rebbe Nachman once told of a well-known rebbe who would pray in his private room adjacent to the synagogue. Hearing sounds outside his door and thinking it to be his chassidim trying to catch a glimpse of their master’s devotions, the rebbe prayed with great fervor and enthusiasm. Later, he discovered that the sounds had been caused by a cat scratching at the door. “For nine years he prayed to a cat! God save us!” (Aveneha Barzel p. 25)

Rebbe Nachman teaches us that those who shun honor for themselves—or who at least, don’t run after it—are able to be more authentic, especially during prayer. In fact, we all should be truly running from honor (though that’s when it usually gives chase!)

How do we know when our prayers are authentic? It’s a bit easier to recognize (hopefully with a pang of conscience), when we’re not being authentic or sincere in prayer. We might be conscious of other people watching us and worried about what they think of us (rather than what we think of ourselves). We might blush or feel oddly disconnected. We might think sarcastic or biting thoughts about others. We might even feel ashamed and kind of squirmy.

If we ignore or bury the feelings that our internal warning system sends us, this can lead to anger or rage.  The anger that comes from not being our true self can be directed outwards at others or inwards, at ourselves. If we don’t allow ourselves to experience the lessons these uncomfortable feelings are teaching us or if we pretend the feelings don’t exist or if we instead transmogrify them into anger, we’re missing out on a life-changing prayer experience. We have a chance to look in a mirror and grow, but instead, turn our backs on it or shatter it with anger.

The key ingredient that triggers most inauthentic, pretentious, honor-seeking behavior is the presence of other people. Without those pesky onlookers (and the inner craving for honor or its somewhat less-tainted cousin, respect), our prayers tend to flow easier, especially if we’re used to behaving authentically whether people are there or not. Once we’ve got the honor-habit, we find ourselves blocked even when we’re praying alone. Better not acquire the habit in the first place!

If we start believing that our importance should be honored by others, we feed the honor-habit and the nefesh habehamit, the animal-physical soul. When we feed it, it craves more and more honor and this can lead to a full-fledged honor addiction.  Then if people don’t treat us “special” we suffer withdrawal and become irritable or angry.

How can we break the honor habit? If we’re conscious that Hashem is there with us, especially during hisbodedus, we instinctively feel we want to honor Him. Begin hisbodedus by telling Hashem what you are grateful for—everything from the sandwich you had for lunch to the fact that your soul was sent down into this world. Once we begin to really thank Hashem, we know that everything we have is a gift and we are humbled. Honor is the furthest thing from our mind.

The most basic laws of modesty that we observe when other people aren’t around also remind us that He’s always around. These laws mean that we pray or talk to Hashem clothed, never in the bathroom. Many are careful to wear shoes when talking to Hashem or at least, when saying Shema and other prayers where we use Hashem’s name. We honor Hashem by recognizing that He’s always with us. We also begin to value our true selves when we recognize that there’s a spark of Him inside us, the nefesh Elokit, the Godly soul.

When we sense the truth and power of the nefesh Elokit in ourselves and others, we not only give honor to Hashem and others, we’re able to be authentic, real and connected. We feel how Hashem both fills and encompasses us—and we’re able to talk honestly with Hashem because we feel so close to Him. We value ourselves and find the goodness in us, without the need for external validation or honor. We should work on treating each individual, no matter how “lowly” they seem to us, with honor. After all, they have a Godly soul, too.

What about my friend who was “dissed”? He didn’t respond to the speaker. Perhaps he remembered the benefit of not only not seeking honor, but enduring its opposite. The Rebbe says in Likutey Moharan, Volume I, 6 (BRI): “Through humility, one merits repentance. For the essence of repentance is when a person hears himself being ridiculed, and he holds his peace and remains silent…”  And, “…a person must…not pay the slightest attention to the opposition and insults he receives.” Then he achieves repentance.  And what could be more authentic?

Thanks to Yossi Katz for sending me the story of the Rebbe and The Cat.

What an amazing article with so many insights that are especially relevant in this day in age!! Thank you!