How Much is a Letter Worth?

In case you haven’t heard, a letter of Reb Noson has been recently discovered. It has been authenticated—yes, it really is his handwriting, etc.—and now, it’s for sale. More accurately, it’s up . The bidding starts at $40,000. (That’s right; 40 grand, 40Gs, 40K.) So, I was wondering: What would Reb Noson say about this?

What is his letter being sold for? Is it kavod, the honor or fame of owning something thhat Reb Noson wrote, that belonged to Rebbe Nachman’s closest disciple? Is it money, a business investment, a property to “flip” and make a quick profit from? Could it be for some extra yiras Shemayim, the fear/awe of Heaven that might (yes, it really might) be transmitted from the actual ink and paper that Reb Noson touched with his holy hands?

Reb Noson so fled from kavod (honor) that Heaven protected him from it. For example, when his students gave him a gift, something would happen so that the gift would be flawed (a pocket watch) or stolen (his shtreimel). I’m sure he would be at least momentarily upset that someone would throw away money to gain honor from something he wrote.

As a business venture, Reb Noson might be surprised that his letter was a “commodity,” but he certainly understood the need for income. So if a Yid could support himself by trading in antique Judaica—including his letters—why not?

Now, if it’s yiras Shemayim a person is after, well, $40,000 can buy a lot of yiras Shemayim. It could provide needed relief for orphans and widows, dyed-in-the-wool Torah scholars, poor brides or just plain, ordinary poor Yidden. It could even buy what we already have of Reb Noson’s writings, the study of which would give a person plenty of yiras Shemayim!

(I’ll admit, that if I had the opportunity to buy a first edition copy of Sichot HaRan (translated as Rabbi Nachman’s Wisdom), I would be sorely tempted. It was my introduction to Rebbe Nachman and the Breslov work I’ve most studied. To have a copy that Reb Noson himself perhaps worked on and touched; that was studied by Yidden in who knows what sort of conditions, would give it an intangible value. By the way, the original title of Sichot HaRan was Maaglei Tzedek and is not identical to what we have today. [Current editions do include all that was in the earlier ones.] I have heard that there are privately owned copies of Maaglei Tzedek in Brooklyn New York.) 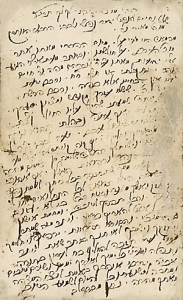 The Actual Letter Via: www.kestenbaum.net

Here is the press release via: www.kestenbaum.net:

AN IMMENSELY RARE AUTOGRAPH LETTER WRITTEN BY REB NOSSON OF BRESLOV. CONTAINS AT ITS HEART, ONE OF THE CENTRAL PHILOSOPHIC CODAS OF BRESLOV CHASSIDUTH.
In this highly personal and emotional letter written to a close chossid, Reb Meir Mirkis of Teplik, Reb Nosson empathizes with the plight ailing R. Meir, expressing concern for the recipient’s welfare and sends advice and blessing for a full recovery from sickness.
The key sentence in the letter – central to the philosophy of Breslov Chassiduth as a whole, reads: “Joy is the remedy for all sicknesses,” (“Simcha hi Rephu’ah lechol HaTachlu’im.”)
PARTIAL TRANSLATION:
“You know that our only strength is (our ability to pray) and I have raised my hands to God, to help you from His Holy Place… a complete and speedy recovery from Heaven, a cure for the soul and a cure for the body.
But, my beloved friend, my request of you is that you strive with all your might to gladden your soul.
Joy is the remedy for all sicknesses (“Simcha hi Rephu’ah lechol HaTachlu’im.”)
Be strong and courageous, and trust in God who will not forsake you and all will be transformed to good. The One who creates cures will cure you and make you well and restore your health, with added might and strength, until you will have the strength to study Torah, to pray and do good deeds your whole life, with lengthy days and good years.
(These are the) words of your true friend for eternity, who awaits for His salvation all day, and hear good news from you quickly. Nathan of Breslov.”
Reb Nosson Sternhartz (1780-1844) of Nemirov and later Breslov, was the devoted, chief disciple and right-hand man of Reb Nachman of Breslov – the most pivotal figure of the early Chassidic Movement. Following Reb Nachman’s death in 1810, Reb Nosson became the leader of the Chassidim of Breslov. Undoubtedly, without Reb Nosson’s total devotion to preserving, developing and expanding the Breslov movement after its founder’s early death, Reb Nachman’s legacy would have been utterly lost. Reb Nachman himself is said to have foretold, “Were it not for Reb Nosson, not a page of my writings would have survived.” Besides his commitment to the dissemination of Reb Nachman’s seminal work Likutei Mohara’n, Reb Nosson also wrote Likutei Halachoth, a commentary on the Shulchan Aruch based on the teachings of Breslov Chassiduth, Likutei Tephiloth, and other works. It was Reb Nosson who was responsible for making Uman, the Ukranian town in which Reb Nachman is buried, a focal point of Breslov Chassiduth.
CONCERNING THE RECIPIENT OF THIS LETTER:
Reb Meir of Teplik was one of Reb Nosson’s closest disciples (see Avaneha Barzel, Sichos VeSipurim MiMoharanat no. 47) and many Breslover Chassidim were guided by him (Gidulei Hanachal Mem 2). Reb Meir was first introduced to Reb Nosson by Reb Shaul of Teplik, who was known for his enthusiastic davening and hisbodedus. Afterwards, Reb Nosson raised Reb Meir to a high level of devotion (ibid. no. 58). “All those Chassidim who were disciples of the Rebbe’s disciples, particularly those who were followers of Reb Nosson and did as he instructed them … all of their hearts burned to serve Hashem and so, were Tzadikim Gmurim, such as…Reb Meir of Teplik” (see Kochvei Or, Anshei Moharan, Pesicha no. 32).
Further details concerning Reb Meir and his descendants in relation to Breslov history, is available upon request. Additionally, research-work is available in regard to Reb Nosson’s activities around the time this letter was written.
This letter does not appear in Alim LeTeruphah, and has remained with the Mirkis family for 170 years. For the past many decades it has lain undisturbed in a bank-vault.
AN UNPARALLED RARITY.

How Does Rebbe Nachman Speak To Me?

Parshat Bereishit: Let There Be Light

i would love to just hold it (let along own it), read it, stare at it, (probably start to tear) and than kiss it…

Reb Noson: The Faithful Scribe in the...