Home Prayer Out To The Field – Expanding The “Me”
Prayer

Out To The Field – Expanding The “Me”

In Sha’arei Tzaddik, Chelek Beis, Michtav #50, Rabbi Gedaliah Kenig (1921 – 1980) pointed out that the last letters from the words “He sees every person” (??? ?? ?? ??? ????) from Tehillim 33:13 can be combined to make up the word “Tehillim” (?????). At face value, it seems like just a nice thought, however, the more I thought about it and reflected on it in hisbodedus, the more I came to understand what a tremendous insight it was for me to be able to live this lesson in Likutey Moharan. Just as I could find myself in the words of Tehillim, Reb Gedaliah was pointing out that every person could find themselves there. I sensed that he was also hinting  that I should not solely focus on myself when reciting them (as I am usually inclined to do).

It dawned on me that although physical bodies separate us giving the illusion that we are  two distinct entities, my wife’s neshoma is deeply connected to mine. We are not two people, we are essentially one. Instead of trying to find just myself in the words of Tehillim, I needed to expand my definition of “me” and begin finding her in the words as well. I also needed to spend time in hisbodedus to inculcate this new insight which I only understoood theoretically at this point.

Following these practices for a little more than a week and sensing the first rumblings of positive results, I also began to expand my definition of “me” to include my children. Having been habituated as an only child to be primarily concerned about myself, these new practices opened up entirely new perspectives for me. They began to push me out of selfish thought patterns and forced me to look at things from a much broader perspective. Anytime I became aware that I was focused only on myself, I forced myself to widen the circle to include the broader “me”.

Perhaps all of this seems like a real departure from anything in the Rebbe’s lesson, however for me it was a riff I sensed when learning this lesson that proved to be meaningful. I hope it may be helpful to you as well. Next week, I will tell you how I was finally able to access eitzah in avodas Hashem through saying Tehillim. 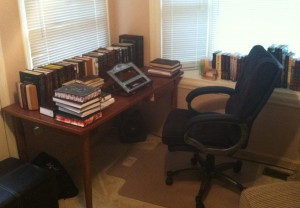 My place for hisbodedus early each morning

Get Ready! The King is Coming