Out To The Field – The Source of Holy Advice

Saying Tehillim in the middle of the work day outside in my special place seemed to act as a defibrillator for my neshoma; waking it up from the slumber caused by a day in the office. One day when looking through Hishtapchus HaNefesh (translated into English as “Outpouring of the Soul”), I took note of the Alter Tepliker’s commentary on Likutey Moharan II:73. There in Hishtapchus HaNefesh #1 he wrote,

“The Rebbe revealed that through reciting Tehillim, Hashem will grant him wisdom, understanding and knowledge so as to enable him to find the specific path that pertains to him according to the root of his soul. He will then know what he must do in order to return to Hashem completely.”

“Through reciting Tehillim you will merit to receive holy advice that is drawn from the illumination of Moshiach, from the fiftieth gate of holiness. All of this advice is contained in Sefer Tehillim.”

Following up on the obvious question, I asked Rabbi Chaim Kramer if a person like myself able to access this advice through saying Tehillim? And if so, how?

Yes!!!! Unquestionably, you can access this eitzah (advice) simply by saying Tehillim. Reb Noson writes this for all people. Tehillim is the 50th Gate as explained in the Likutey Moharan  II, 73 lesson. Therefore, if you recite Tehillim, you too can draw from that gate what you need. How will you know? Good question. But like everything else, we try! If we’re sincere, we will succeed. Just have patience.

Discussing the piece from Hishtapchus HaNefesh and Rabbi Kramer’s insight with my chavrusa, I told him that one could get the idea that through saying Tehillim one will eventually receive his life’s “master plan” that details what he needed to do to achieve his unique tachlis in life. My chavrusa said that he understood this teaching differently; that it meant that we are given a micro plan, not the macro plan. For example, on occasion we may get the inclination to do something in avodas Hashem, and through saying Tehillim we may see a verse in Tehillim that appears to directly relate to what we have the inclination to pursue; seemingly validating this next step.

I asked Rabbi Kramer once again about whose understanding was correct, my chavrusa’s perspective or mine. Rabbi Kramer responded:

Actually you’re both right. But mostly you will see the micro plan simply because we cannot see the future.

While I had a bit more clarity on these ideas from Rabbi Kramer’s response, I still could not entirely get my head around them so I continued my practice of simply saying Tehillim down by the river; waiting for the next insight as I continued to live this lesson.  Next week, I will tell you more about an insight I had on another aspect of this lesson in Likutey Moharan from the writings of Rabbi Gedaliah Kenig. 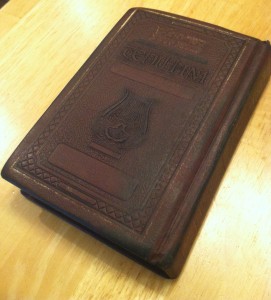 The Sefer Tehillim I have used since 2002.

A Trip To Meron

The Voice of Prayer

THE POWER OF PRAYER

Ask A Breslover: Is There A Soul Correction...

WHERE TO RECITE PSALMS

Very inspiring insights, just along the ways I have always looked for.. how to Apply the teachings to my daily life. Be blessed and keep growing And sharing! RLR

Thanks so much for the comment. I was beginning to wonder if I went off the deep end and started writing posts that people no longer relate to…

Ask A Breslover: Getting The Best Advice...

The Power of Writing it Down!

Out To The Field – Music Appreciation...