Walter Hilliger lives on a Caribbean island called Guadeloupe. Recently, he became interested in Rebbe Nachman and has begun studying Likutey Moharan. He was kind enough to allow us to interview him about what Rebbe Nachman’s teachings mean to him in this distant land.

Guadeloupe comprises two Caribbean islands in the Lesser Antilles. It is an overseas department of France and has a population of about 400,000. The colony was built up over generations by immigration from Europe, Africa and Asia. As a result, it is one of the most diverse regions of the European Union, given its colorful range of peoples and its paradise like landscape. For example, it boasts the highest waterfalls in the Lesser Antilles.

What kind of Jewish life is on the islands? 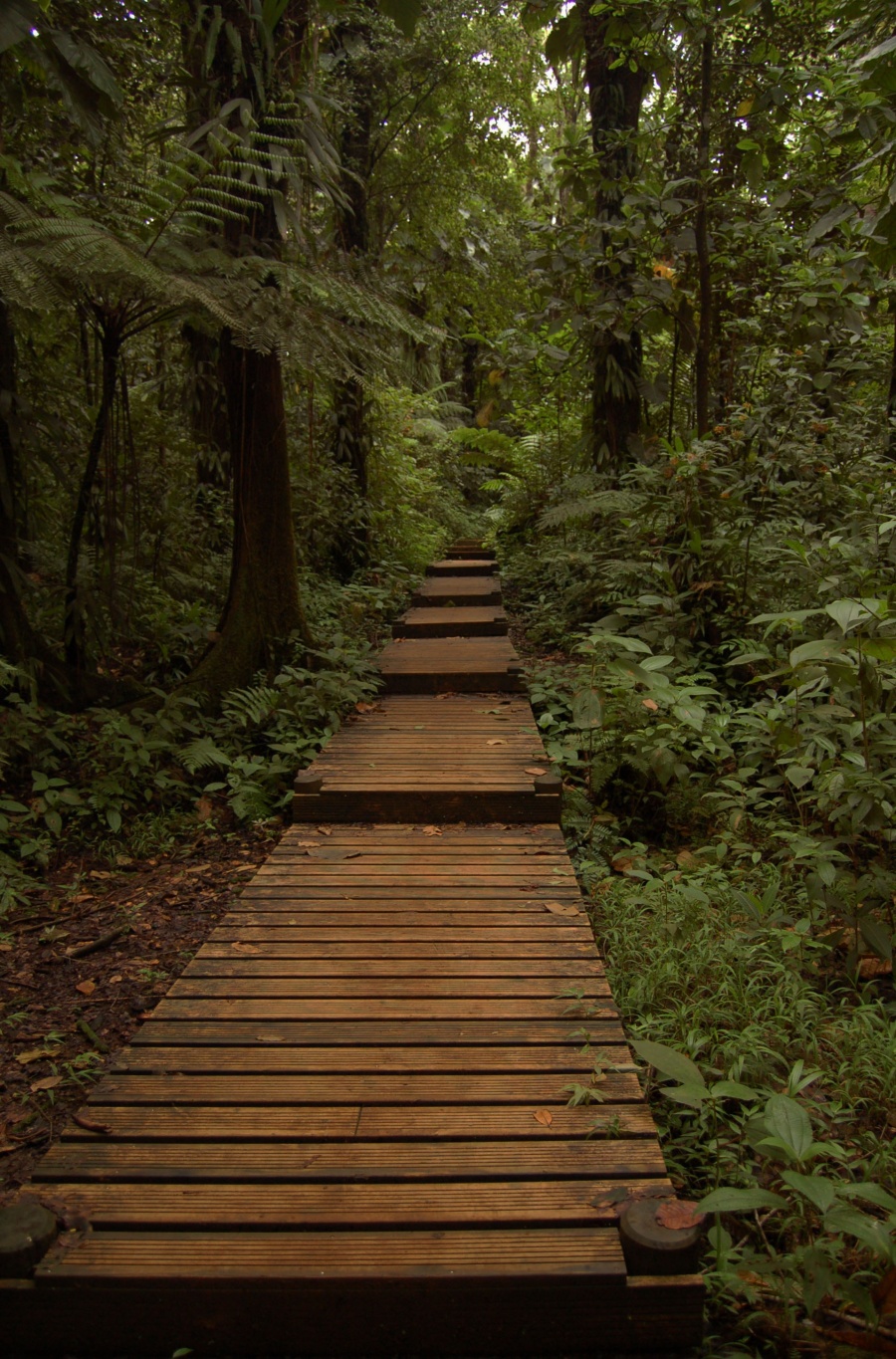 A Mizrahi community affiliated with the Consistoire de France is located on the northern island of Grand-Terre. This community was formed in the 80’s by Jewish families who came to France via Morocco and Algeria. Last Pesach they shared with us some Algerian-style, orange-and-wine-infused matzos, and for Purim we received a rabbi’s visit with their Megillah.

I have also come in contact with the rabbi of Chabad Martinique, who has helped me with my Daf Yomi cycle. He has had an uninterrupted presence on the neighboring island at the request of the Chief Rabbi of New York. There is neither a synagogue nor a rabbi on our southern island of Basse-Terre.

A historic reason for the absence of Jewish communities was the edict of expulsion in the 17th century. The Code Noir (Black Code) banned Jews from the colonies of the Catholic monarchy. Those who stayed had their goods and their persons confiscated, meaning they became slaves who were prevented from Jewish learning. Nonetheless, in the words of the historian Abraham Cahen, “The children from the union between Ashkenazim, Portuguese Sephardim and Kushim were raised as Jews even if the law didn’t recognize their Jewishness.” Proof of this can be found in the archives of 1840, which shows hundreds of Jewish names among the locals, like Sinai, Eliezer, Levi, Maimon and Breslau. The latter comes from a family of bakers in Basse-Terre, whose bakeries still produce pain natté, a traditional sweet egg bread that has the texture of challah.

After the second abolition of slavery in 1840, some Cochin Jews arrived from the Indian subcontinent under contract to work on the sugar plantations. They didn’t have much choice as to what they could bring in a small baggage, so they brought the seeds of what they loved the most, tropical fruits and veggies. Today, in their merit, we have an awesome diversity of fruits and vegetables.

When the Cochin Jews proved to be good workers, the landlords burned their contracts and they never went back to Asia. In fact, they still have no papers to return to India, much less to Israel. Eventually they all became French citizens with equal rights. So Jewish blood runs through the veins of some families who are unaware of their Jewish roots.

How did you discover Rebbe Nachman and his teachings?

After six years of Zohar study, I started asking questions but did not receive satisfactory answers. I sought universal wisdom to guide me on this intergenerational journey. As our Sages teach, it takes 500 years to walk from one end of the world to the other (Tosafos on Chagigah 12a). Five hundred years represents many lifetimes. So how does the soul survive on its journey? For many years I searched for a Jewish vision that could give me the feeling of being at home at any point along the path.

One night I watched an online video of Rabbi Yisroel Ber Odesser quoting Reb Noson as saying, “If in the next world they would sentence him to Gehinnom, he would recite a teaching from Likutey Moharan and all the tzaddikim would come to hear—and then it would become Gan Eden.”

When I learned about Breslov’s non-mainstream and countercultural reputation, I felt an intuitive affiliation in my soul and heart. Still, I didn’t expect a Chassidut founded in Ukraine to seed on a tropical island. But then I came across the breslov.org website. Each night after midnight, I watched the video shiurim of Chaim Kramer on Likutey Moharan. Then I saw the promotional video for the Grand Siyum of the first complete bilingual edition of Likutey Moharan. By then I knew it was what I longed for, and it is infinitely more than I expected.

How has Rebbe Nachman improved your life and Judaism on this distant island?

My wife and I spent several years in Galut Edom (the Western world), where I constantly felt pushed down. Then we decided to leave and work in Galut Yishmael (the Arab world), where I was successful in business but lacked a good environment to raise a family. So we went back and forth atoning for our lack of faith and my ignorance. What kind of exile do we have on a distant island in the Caribbean? Much like in Israel, we have a lesser influence of Edom, which, as the Rebbe explains, is the power received by governments to punish people for their wrongdoings. Such dominance has nothing to do with leadership and differs from the ability to lead people with compassion.

Rebbe Nachman has increased my compassion and helped me come to terms with my lack of authority and my incapacity to judge people for their wrongdoings. Such understanding came with the realization that only through Edom are people punished (Likutey Moharan I, 20:6-10). The Rebbe teaches that we can redeem ourselves from these collective punishments by seeking Godliness in everything (Likutey Moharan, Vol. 1, Tcheriner Rav’s commentary).

The more I explore Rebbe Nachman’s writings, the more universal I find their practice on the island. Other lessons allow me to raise my thoughts to the World to Come. These help me to bear the present world by understanding the modus operandi of the evil inclination, which always seeks to disqualify Divine grace.

Rebbe Nachman consolidated my faith, because in his teachings “it is impossible to come to faith except through truth” (Likutey Moharan I, 7:1, 2). In his answers I found a treasure capable of raising us up and elevating any land.

If you have your own interesting stories that you would like published on our website for the benefit of others, please email us at [email protected] and we would be happy to publish them.

The Light of Shabbos

Make Hitbodedut Wherever You Find Yourself

The history of Jewish Meditation

Survive the Flood of Negative Thoughts

Dear Mr.Williger; My wife and I are readying ourselves for retirement, and we are looking into a tropical, seaside environment. We have been mostly observant for the last 35 years. We are wondering if Guadaloupe would be a good place to initiate a jewish meditation and learning community,. I too have been positively influence by rebbe nachman’s chassidus and teachings. There is a shiur in lekutai moharan here in Baltimore that I sometimes attend ( it is a bit too esoteric for my tastes, with the gematriot etc.) but I love all chassidus and all torah. I am fortunate to learn the daf every morning with an amazing rabbi, Rabbi Shmuel Silber, who has never failed to inspire me. I learn either in his beit midrash or on line. There is a group of jewish people, generally young, who are part of the Jewish intentional community initiative, and are starting farms and jewish communities in the states, but it is slow going. What do you think of a retirement destination with Judaism and meditation in Guadaloupe. Shabbat shalom.

When a person is looking to move to some place – Likutey Moharan, Volume V, 40, Rebbe Nachman discouraged all motives related to economic considerations, even the weather condition. One exception may be the expressed purpose of spreading Torah, by starting farms and a learning community. Yet, it should be taken into account that it is more difficult for a person to remain observant in a place he is not familiar with, especially where the Jewish population is very small.

Hello Mr. Hilliger, I will be visiting the island of Guadeloupe next week and would like to know if there is synagogue or place of worship on the island or a nearby island with Friday night service.

I replied by email.

hi i am looking for a synogogue to pray when we visit guadalupe where is it?

Shalom, there is synagogue of mizrachim with a kosher grocery store and restaurant in Gosier, Grand-Terre island. I email you. Kol tov

Hello Mr. Hilliger, I have noticed on wikipedia you are sourced as the author of “On Divine Providence or Universal Nature, Guadeloupe, 2018. English translation by Walter Hilliger; ISBN 978-2-9561859-4-9”, but I cant seem to find your book anywhere… I would really love to purchase this book and read it many times over, could you please direct me to where I could purchase a copy?

Hi Aaron, Bezrat Hashem the book will be out in 2019, some touch-up work is done to accommodate an introduction and an audiobook.

My Mindset for Rosh Hashana and the...