Truth is recognizable if we but approach the things we do with open minds, seeking truth and making ourselves ready to accept it.

Rebbe Nachman teaches: Truth is performing a mitzvah when alone in the same way you would perform it when among people: with the same care, with the same devotion. Such is the way of a man of truth (Likutey Moharan I, 251). A person once spoke to Rebbe Nachman about becoming a rebbe. Rebbe Nachman warned against this. “You won’t even be able to recite the Grace after Meals properly. All your thoughts will be concerned with acting in a manner acceptable to your followers” (Rebbe Nachman’s Wisdom #47).

Truth, in this sense, means not needing “assistance” from others. For example, when a person prays, he sometimes needs “help.” His intentions and actions are dictated by the fact that others are watching him. He needs the public eye to see how well he is praying. There are others that truly want to pray earnestly, but being in public distracts them, because they may feel they are being watched even when this is not so. Truth is when one does not need “assistance” from anybody else. It doesn’t matter who is around, for one is concentrating on serving God (Likutey Moharan I, 66:3).

With open minds. There’s a tendency today to accept truth only when a person “feels like it.” This is not enough. There is a great danger in ignoring the truth. Rebbe Nachman teaches: The character trait of nitzachon (victory) prevents us from accepting the truth. If, in a conversation or an argument, we recognize the validity of the other person’s opinion, we’ll twist our own reasoning and opinion, rather than accept – even worse, admit – that the other person may be right (Likutey Moharan I, 122). This also applies when we argue with our conscience. We might understand that what we are doing is wrong, but we rationalize; we use “logic,” rather than truth, and convince ourselves that what we are doing is right.

There’s a tendency today to accept truth only when a person “feels like it.” This is not enough. There is a great danger in ignoring the truth.

Therefore, truth is recognizable if we but approach the things we do with open minds, seeking truth and making ourselves ready to accept it. Could the other guy be right? Maybe yes, maybe no. Let’s hear him out. Hear what he has to say. Then evaluate. Take the good points, the positive points, and accept them for what they are – truth. Because actually, from his viewpoint, they are the truth. Then offer your viewpoint, without looking for “victory.” The truth will win out.

Recognizing a lie. An even greater danger exists in altering the truth. It is important to recognize this in ourselves and in others. The Prophet bemoans (Isaiah 5:20): “Woe to those who call evil, good; and good, evil. They make darkness [appear as] light, and light [appear as] darkness; the bitter they make sweet, and the sweet they make bitter.”

Mathematical equations must be absolute. Even the slightest mistake of a mere fraction, say in engineering, can cause a series of erroneous calculations that can have serious implications. How much more so when a person alters the truth of life and weaves a web of falsehood and lies around himself. Once a lie is told, a second must be created to cover for the first one, and so on. There was a man in Reb Noson’s neighborhood who was a sinner and people were misled by him. Yet, he was known as a person with principles who never lied. When asked about him, Reb Noson replied: “Perhaps he doesn’t lie. But he lives a lie!” (Oral Tradition).

Throughout his writings, Reb Noson exhorts us to search for the truth, and to make our search constant. Of people who publicize their distorted views and call them truth he writes: The word truth never leaves their mouths. They say truth. They scream truth. But, woe to them and their truth (Likutey Halakhot, Shabbat 7:64). 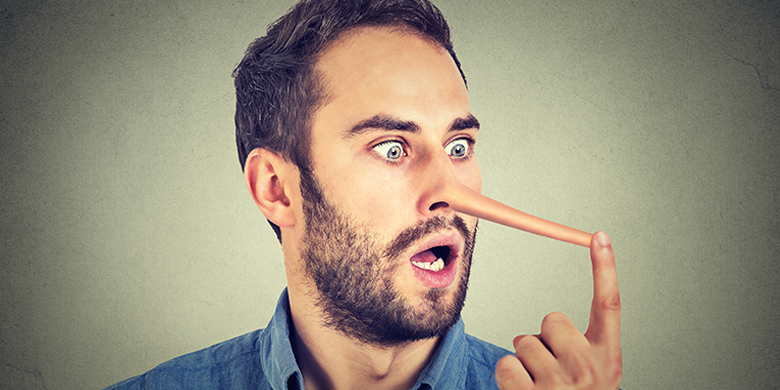 Once a lie is told, a second must be created to cover for the first one…

…even when it hurts. Sometimes the truth hurts. Yet, recognition and acceptance of the truth is the very first step in healing. Recognizing illness helps bring about the cure. So too, recognizing the truth of the situation we’ve been presented with helps us to accept the right path to follow. It is not easy; quite the contrary, it is always very difficult to face up to a problem. But remember: the sooner we accept the problem, the sooner we can get on with life.

It is far healthier to accept the truth as early as possible in life and to make the necessary corrections when we are more adaptable. It hurts less that way. By searching for the truth, and by accepting it, we engage in a constant review of our life. We’ll be able to spot the weak points, correct them and build a better future.

In others. We also have to recognize the truth in others. Rebbe Nachman once said: People make a mistake when they claim that a Tzaddik cannot commit an error, and if he commits an error, he is no longer a Tzaddik. I say: The Tzaddik remains a Tzaddik and the error remains an error (Siach Sarfei Kodesh 1-46).

People have the tendency to criticize. “He’s not really religious… he’s a faker… he never was…” We find it hard to overlook the mistakes of others. But people are just that – people. And a Tzaddik is a Tzaddik. Yet King Solomon taught us: “There is no righteous man that doesn’t err” (Ecclesiastes 7:20). Man is human and subject to mistakes. Rebbe Nachman extolls the virtues of truth – real, absolute truth. Where there is error, recognize the error, acknowledge it. This is truth. What is wrong, is wrong. Even so, what is good, remains good. It, too, has to be recognized. (The Tzaddik himself is well aware of his error, yet not defeated by it; cf. Rebbe Nachman’s Wisdom #30; #235).

Rebbe Nachman exhorted us to recognize the Tzaddik, and the good points, too. Truth is definitely black and white. Yet, our “humanness” dictates that we also find ourselves faced with gray areas, where the truth – as best we can determine it – could be this way or that… In such cases, we should judge others favorably. We are free to scrutinize the gray areas of our own truth in black and white, but not the truth in others. The validity of their “gray truth” is not for us to judge with a critical eye.

Parshat Bamidbar: You’re In! You Count!

Getting it All Done in Summertime: Expanded vs....

This Too Shall Pass

[LISTEN] Are You Free To Choose?

The coming of Moshiach – PART 20