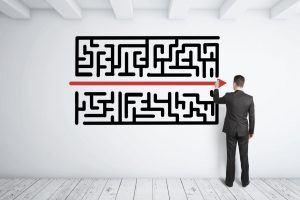 Someone once asked Rebbe Nachman, “When I’m praying and I mention HaShem’s holy name, what profound thoughts, what deep intentions, should I have in mind?”

Anyone familiar with Rebbe Nachman’s teachings knows that in this exchange, the Rebbe was talking about his favorite topic: serving God. For the Rebbe, serving God encompasses all aspects of life – bar none. This being the case, one would have expected Rebbe Nachman’s answer to his follower to have been a long, complex, explanation of God’s greatness, His strength, His awesomeness, His omnipotence… Yet, the Rebbe’s answer was anything but that. Actually, his answer was ultimately simple. What should his chassid have in mind? “God!” No more, no less.

Life can be simple. It can be complicated. It depends on what we make of it. Rebbe Nachman’s advice: Keep life simple. It’s up to us. Whereas the follower assumed that one needs many complex thoughts and intricate intentions, the Rebbe exhorted otherwise: There is just one necessary path – SIMPLICITY!

Ironically, simplicity is neither easy to attain nor is it effortless to define. Reb Noson himself tells us: Simplicity, in itself, is a very deep and an extremely difficult concept to understand (Likutey Halakhot, Birkhot HaPeirot 5:13). This very inability to find the right words to describe it, as well as the difficulties involved in achieving it, are symptomatic of how far modern man has been distanced from simplicity.

Nevertheless, for even a basic understanding of Breslov Chassidut, it is vital that we understand and appreciate the important role which simplicity plays in the life of a Jew.

Ask most anyone to describe a simple person – a simpleton. You’ll probably be given a negative description, a picture of someone dull-witted, foolish or even imbecilic. At best, saying something is simple conjures up the image of commonplace and inconsequential. This is very unfortunate and indicative of our own attitudes and prejudices. It is not at all what the Rebbe had in mind when he said: The main goal of a Jew is to serve God with simplicity and without any sophistication (Likutey Moharan II, 19).

The Torah, in general, and Rebbe Nachman, in particular, attributes an entirely different meaning to the Hebrew word for a simple person, tam. Rather than being simple-minded and lacking in intelligence, the simpleton is someone who is unassuming, sincere, straightforward. He is without guile and shuns twisted reasoning. As for the word simple, it implies wholeness and singularity, and even unity. Simplicity suggests freedom from mixture and convolutions, and denotes something pure and unadulterated. Thus, living life – serving God – simply, means adhering to the essentials, being real, and avoiding all forms of complexity and sophistication.

Accordingly. the paradigm of the simple man is Jacob, whom the Torah explicitly refers to as a tam (Genesis 25:27; thus making his outwitting of his brother Esau all the more amazing).

The Jewish people as a whole is called by God: “My dove, My simple one” (Song of Songs 5:2). And God HImself has exhorted us that we should “be simple with God your Lord” (Deuteronomy 18:13).