STRINGENCIES? (PART II) – GOD IS ONE

“I did what I could. The question is, have I fulfilled the teachings with the simplicity that the Rebbe demanded of us?!” (Reb Noson).

Reb Dov of Tcherin, one of the Rebbe’s followers, wanted to perform one of the more difficult practices in serving God – he wanted to wake up for Chatzot, the Midnight Prayers. The problem was that whenever he did this, the lack of sleep would cause Reb Dov severe headaches. Informed of this, the Rebbe told him, “Sleep and eat. Just heed the time.” Afterwards, he advised Reb Dov that his “Chatzot” should not be at midnight, but at three o’clock in the morning (Kokhavey Or p. 25).

Then there was another of Rebbe Nachman’s chassidim, Reb Naftali, whom the Rebbe counseled to be especially careful in the mitzvah of tzitzit. Once, Reb Naftali climbed a ladder to attend to some repairs and his tzitzit tore. Reb Naftali refused to move until someone had brought him a kosher pair. Afterwards, he never went anywhere without having spare tzitzit with him (Until the Mashiach p. 311). (This law is mentioned in the Kitzur Shulchan Arukh 68:6 – One should never travel without spare tzitzit. Thus, if one string should tear, he won’t be left unable to perform this mitzvah.)

These two stories show us Rebbe Nachman’s approach when advising his disciples concerning stringencies. Reb Dov very much wanted to fulfill the mitzvah of Chatzot by rising at midnight. Even so, the Rebbe warned him that it was not to be at the expense of his health. Yet, when it came to Reb Naftali’s special mitzvah, the Rebbe suggested he be exceedingly careful – and that, he was.

I’m also reminded of what my Rosh Yeshivah would say: “Why is it that people always choose to be stringent in those areas where others can find out about it? Wouldn’t it be far better to be strict with oneself in such matters as slander, additional Torah study, greater concentration in prayer…”

Shortly before Reb Noson passed away, he gave a very deep sigh. When asked the reason for this, he replied: “It occurs to me that perhaps I have not properly fulfilled what Rebbe Nachman taught.”

The people standing around him were amazed. “If not you, then who can honestly say that he has fulfilled the Rebbe’s teachings?!”

“As to fulfilling the Rebbe’s advice,” Reb Noson answered, “I did what I could. The question is, have I fulfilled the teachings with the simplicity that the Rebbe demanded of us?!” (Rabbi Nachman Burstein).

“Why is it that people always choose to be stringent in those areas where others can find out about it? Wouldn’t it be far better to be strict with oneself in such matters as slander, additional Torah study, greater concentration in prayer…”

Simplicity is the highest possible virtue, since God is certainly higher than everything and yet He is ultimately simple (Rebbe Nachman’s Wisdom #101).

“The deeds of the Mighty One are simple” (Deuteronomy 32:4).

Rebbe Nachman teaches: Creation has many parts. Yet, all the various parts of Creation emanate from God. He is one. He is simple. Our mission in this world is “to reveal the unity from amongst the many.” That is, from all of us – from all our differing thoughts, perspectives, deeds, backgrounds, etc. – we still come to recognize the one God (Likutey Moharan II, 2:6).

This is not as complicated as may appear at first glance. Remember that everything emanates from one source – the One Source. Therefore, in our own ways and with our specific differences, each of us reflects that Source. By extension, there is actually no reason to view life in so complicated a manner as most people do. In reality, everything has its root in the unity of the one and simple God. Differences emerge because He manifests Himself to each of us differently. What we have to do is look for God everywhere, in everything. Then we will see that whatever appears complex and diverse is in truth very simple and singular; what appears separate is actually united; what appears fragmented is genuinely whole; what appears to require great sophistication only needs the utmost simplicity. 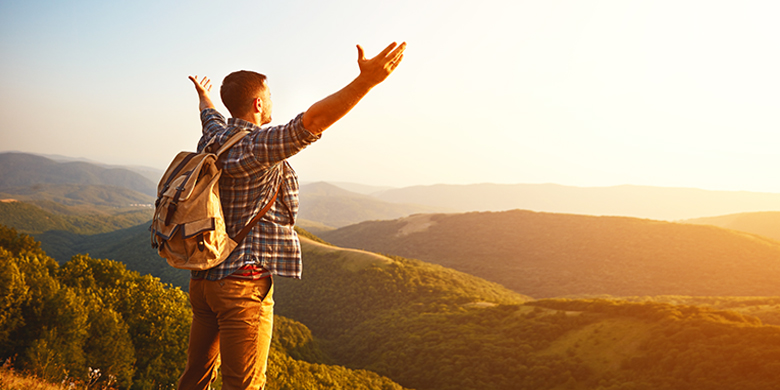 “The deeds of the Mighty One are simple” (Deuteronomy 32:4)

At the same time, Rebbe Nachman understood that relatively few ever succeed in revealing the unity from amongst the many, and that those who can do so consistently are even rarer. Most of us have a great deal of difficulty just keeping our own lives simple. The Rebbe was able to appreciate our struggles with the diversities of this world and understood the complexities we face. By the same token, he also realized that most people tend to complicate matters far beyond reason. We fret away our days and years, anticipating and contemplating difficulties and problems that we assume are on the way. We set goals – material as well as spiritual – and then tie ourselves in knots over presumed set-backs. We plan having a good time and then fret that this-that-and-the-next-thing will go wrong. We spend time worrying about things that may never happen. Anxiety! Anxiety! Anxiety!  Nobody denies that difficult moments can and do come, but we also have no idea how they will affect our lives; whereas, keeping the perspective itself simple solves many of life’s most difficult problems. This is why the Rebbe emphasizes simplicity so much. If we took things as they are, one at a time, one day at a time, we could lead a much simpler and happier way of life.

Who is for God? Come to me!