The Candle Which Is Never Extinguished – Parshat Tetzaveh 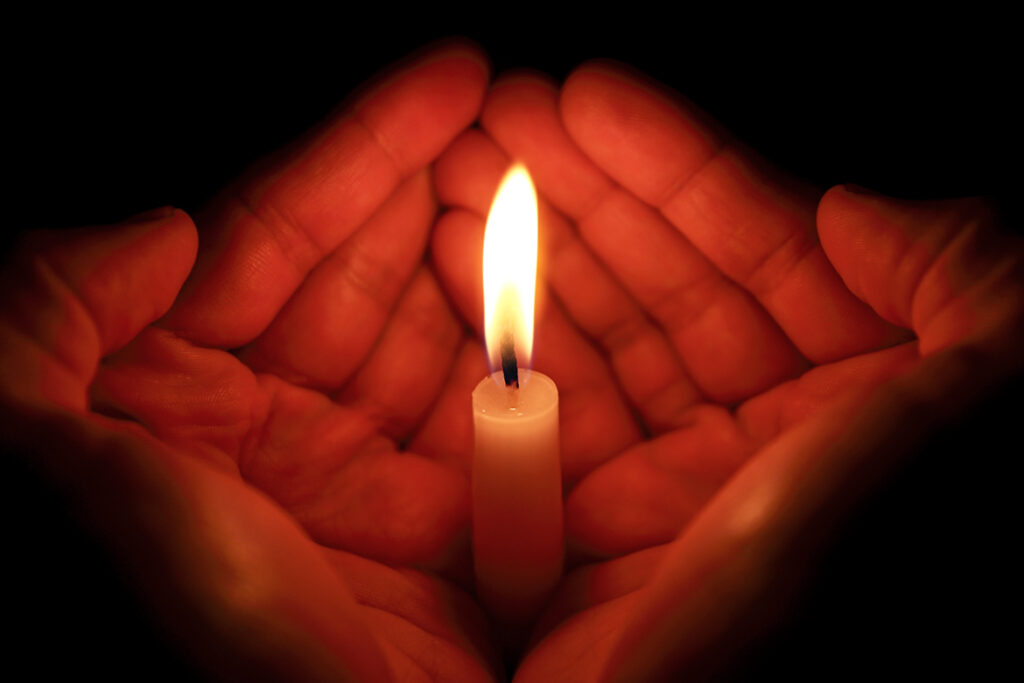 What happens after the Beis HaMikdash (Temple) is destroyed or after the Tzaddik passes away? How do we find the light and vitality to get through the darkness? Is there a candle which burns eternally? This is the subject of this week’s parsha discussion.

This week’s Torah portion is parshat “Tetzaveh.” It addresses the mitzvah of lighting the Menorah: “Now, you must command the Nation of Israel…to keep the lamp burning continuously. Aaron and his sons will position it from evening until morning before G-d in the Tent of Meeting, outside the Curtain that is over the Testimony. It is an eternal decree for all generations for the Jewish people” (Exodus 27:20-21). The Torah connects the act of lighting the Menorah with the word “tamid,” meaning that it is eternal, and it must be placed in the Ohel HaEidut (Tent of Testimony), where the Holy Torah (the Tablets of the Covenant) were located.

Rabbi Natan points out that the Tent of Testimony and the Menorah correspond to day and night. The Torah corresponds to day. The Torah is the source of light, and it illuminates the “mochin” (mentalities), with an enlightenment of daat (knowledge), in a direct and unobstructed manner. It corresponds to the drawing down of mochin, the enlightenment of daat, without any concealment. The candles of the Menorah correspond to the night. At that time, the light vanishes, and this indicates that the mochin and the daat have ceased. Therefore, they had to light the candles of the Menorah at night to draw the illumination of the light of the Holy Torah also into the night. Thus, they had to light the candles of the Menorah in the Tent of Testimony where the Torah was located, as a sign that the light could only be drawn down from the light of the Torah which they received during the daytime. And through this power, they were able to bring the illumination into the night when it was dark.

To understand all this, we will learn a basic concept that Rebbe Nachman revealed: “The Tzaddik has the power to raise the souls of Israel and to renew them, to reveal to the world the Torah that will be revealed in the future, as it is called to in the Zohar: “Oraita d’Atika Stima.” Through the power of this Torah, we can return all the souls to G-d and draw down complete Providence and great abundance” (Likutei Moharan I, 13).

In our context, this refers to the fact that when the great tzaddikim (who are the aspect of Moses), draw down their chiddushei Torah (new Torah insights) from such a lofty and sublime place with such incredible insight, there is a power to their teachings to eternally restore and enliven all the souls that involve themselves with their teachings. This is because the revelation of their teachings came through the uplifting of the souls of Israel and the renewing of their souls. These tzaddikim also have the power to uplift the souls of future generations who did not know the Tzaddik during his lifetime, as it is written in the verse: “But not only with you…with those standing here with us today…but [also] with those who are not here with us this day” (Deuteronomy 29:13-14). These tzaddikim drew down Torah with such holiness that anyone who would ever learn their teachings would be able to escape from the darkness of their own gloom, in the aspect of: “Your words are a lamp for my feet, and light for my path” (Psalms 119:105), because by engaging in the Torah of the Tzaddik, the soul of the one learning is renewed in the aspect of “ibur” (soul attachment), because this Torah was drawn from the elevation and renewal of souls.

We will tell a story connected to this idea. That the light of the tzaddikim also shines in the darkness of spiritual decline. Among the Breslov Chassidim in the last generation was a tzaddik named Rav Yonah Leibel ztz”l. He was a very special Jew and lived his life in holiness and purity. In order to illustrate and to get to know a little about this special figure, we can say that he was an incredible eved Hashem (servant of G-d). He woke up every night at chatzos (midnight) and prayed that in the near future would be the coming of the Geulah (Redemption). However, he was a practical Jew and behaved in a simple manner. One time during the prayers, after making great efforts with his prayers, he pulled his tallit over his head and mumbled: “Dachilak (in Arabic, an expression of helplessness) things are not going well today.” He was practical and knew that sometimes serving G-d was not easy, and he knew how to look it in the face…

HaRav HaChassid Yaakov Meir Shechter shlit”a, who knew him, related that he once was at a wedding where there was a badchan (one who tells jokes). As is the way of the jokers, he imitated one person and then another, and then he started imitating Breslov chassidim during hisbodedut (heartfelt prayer in everyday language). At one point, he presented the Breslov chassidim in a negative light, and this created a bad atmosphere. To prevent the disrespect to the Breslover chassidim and the holy practice of hitbodedut, Rav Yonah did not remain silent and responded, “But if you would really take the things that you presented seriously, it would actually help you very, very much.” Rav Shechter added: “We saw that Ravi Yonah had ruach hakodesh (Divine Spirit), because the badchan unfortunately deviated from the straight path (became non-religious), and if he had done hitbodedut, it would have indeed helped him to stay on the straight path.”

In our context, it is told of Rav Yonah, who was the one who blew the shofar on Rosh Hashanah for the kibbutz (gathering) of Breslov followers in Meron, that every year before the tekiot (shofar blowing), he would open by roaring out the verse: “From the straits, I called out to G-d” (Psalms 118:5). And then, He would recite the verses before the blowing of the shofar in a pleasant voice that would melt the heart. Among the participants in the kibbutz was a bachur (young man) who liked to hear the voice of Rav Yonah while he recited the verses, and he would stand next to him to absorb into his heart this sublime experience every year. At that time, the winds of freedom and lawlessness were blowing, and many young people were swept away from being religious, and unfortunately the bachur who we mentioned was also swept away by the “spirit of freedom” and became non-religious and abandoned the yoke of Torah and mitzvos. Eventually he met a non-religious girl and set out with her on a cruise ship while cutting all his emotional ties to Judaism. He did not even pay attention to the Hebrew dates on which the voyage was to take place. As the ship set sail, the bachur went up to the deck to inhale fresh air and look at the horizon and enjoy the endless view of the sea. Suddenly, out of nowhere, he heard a roaring voice “From the straits, I called out to G-d.” It was the voice Rav Yonah Lebel who had already passed on from this world. The bachur was amazed at how this voice could have come to him from out of nowhere. He was stunned when he suddenly realized that it was Rosh Hashanah!!! Feelings of remorse filled his heart regarding his unseemly behavior, and on the spot, he undertook to improve his ways until he returned in complete repentance.

Behold: we can see that the voice of the tzaddikim, which is the light of the Torah, seeps deep into the heart and illuminates both into the darkness and into the night with its power to illuminate even into the darkest darkness.

This is why the Torah commands us to light the candles of the Menorah opposite the Ark of the Testimony, that is, to illuminate with the power of the Torah even the darkest darkness of the night. There is no darkness that cannot be illuminated, as the verse continues: “… her lamp does not go out at night” (Proverbs 31:18).