Home Advice THE SOPHISTICATE AND THE SIMPLETON
AdviceFaithJoyReadStories

THE SOPHISTICATE AND THE SIMPLETON

Whoever follows this path of simplicity will live a very good life, a joyous and content life!

One of Rebbe Nachman’s most memorable stories, from his classic work Rabbi Nachman’s Stories, is “The Sophisticate and the Simpleton” (pp. 160-196). In the story, the Simpleton has very little formal education and is very limited in his abilities. He sews triangular shoes for a living, has nothing but bread and water for sustenance and is so poor that he must share a tattered sheepskin coat with his wife. And yet, for him, this coat serves as “exquisite finery” for every occasion, his daily rations taste like the “finest wines and delicacies.” Although with his limited skills the Simpleton earns far less than his fellow shoemakers, his self-confidence and joy are such that he feels absolutely no jealousy or want. “Why must we speak about others,” he tells his wife when she criticizes his inability to charge as much as others for his work. “What do I care about that? That is their work, and this is my work!” And when some of the townspeople would engage him in conversation so that they could make fun of him, the Simpleton had but one request: “Just without mockery.” If they assured him of their sincerity, he would never probe their motives more deeply. Being a simple person, he never engaged in the sophisticated speculation that would suggest that this in itself might be a means of mocking him.

Indeed, the Simpleton never questions or tries to second-guess anything. He just conducts himself simply and honestly, feeling only a great deal of satisfaction with his lot. No matter what happens, he is always very happy. Because of his simplicity, he never feels any lack, and due to his simplicity, he eventually becomes the Prime Minister of the land, becoming even wiser than his friend, the Sophisticate.

The Sophisticate, on the other hand, has advanced education and training. He is truly a man of the world. He has experience in commerce, craftsmanship, and even medicine, and has broadened his outlook through travel. Despite all this, the Sophisticate is never satisfied with what he has; he is always looking for something better over the horizon. He is also very exacting and very stringent in everything he does.

When his work as a master goldsmith is not appreciated by others he feels rejected, yet when minute imperfections in his diamond engraving go unnoticed he chastises himself for what he sees as his flawed skills. In contrast to the Simpleton, the Sophisticate needs public approval, and when his expertise as a physician goes unrecognized, he rejects this profession as well. Furthermore, because his strict standards allow for no flexibility, it is impossible for him to appreciate the work of others. His clothing, his accommodations, his life, have to be just so, or else he is upset and becomes depressed. he is unable to appreciate simplicity or the simple way of life. In fact, he has no life! 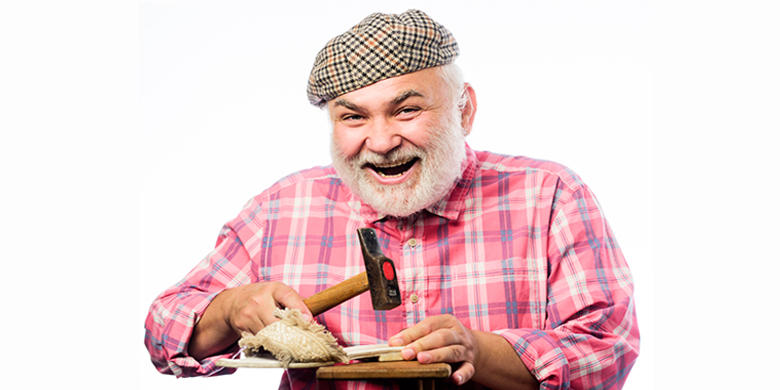 No matter what happens, he is always very happy!

The Sophisticate’s lack of self-confidence does not allow him to speak with those whom he considers his inferiors, because this would tend to reduce his own status, something he feels he must protect at any cost. As a result, he can unburden himself to no one, and is, therefore, always miserable (Chokhmah U’Tevunah 8). His sophistication not only makes him arrogant, but also skeptical and unable to trust anyone. Never satisfied with the obvious meaning of things, he always probes and analyzes for the “true” meaning. This often leads him to wrong conclusions and eventually causes him to lose both his stature and wisdom.

Reb Nachman of Tcherin, one of Reb Noson’s students, writes: The Rebbe told this story in order to instill in us the importance of simplicity. Whoever follows this path of simplicity will live a very good life, a joyous and content life (Rimzey Ma’asiot).

Make Your Own Miracles

Help Is on the Way

How to Deal with the Skeletons in your...

Stop the Madness – with the Family Salad...

Twin With Your Creator

ONLY ONE TRUTH; THE REAL TRUTH

Can You Hear the Song?

It is Time to Vanquish the Darkness