Home Stories The Story of Our Lives: The Lost Princess (#10)
Stories

The Story of Our Lives: The Lost Princess (#10) 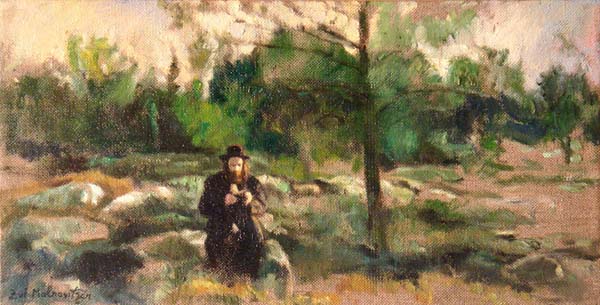 Hi there, friends! In the previous lesson, we left the lost princess as she was detailing the five conditions the viceroy would need to fulfill in order to free her from her captivity in the Palace of Evil. She had informed him that he would need to find a specific place (stability / Hashem’s ever-present love) and stay there for an entire year (a complete cycle of time). In the current lesson, the viceroy learns what he is to spend his year doing.

“All that year you must long to free me.”

This is the most substantial requirement set by the princess: the viceroy must spend the entire year yearning and longing for her release. Traditionally, yearning for success in avodas Hashem is seen as a means to an end, an emotion which leads one to serve Hashem through emunah, Torah study, mitzvah observance, and acts of kindness. Oftentimes, yearning which doesn’t directly lead to action is dismissed as wasteful and useless. Here, however, Rebbe Nachman of Breslov teaches us that yearning is, in fact, a precious avodah in and of itself. (See Sichos HaRan 27) Even though the connection between the viceroy’s yearning and the freedom of the lost princess may seem obscure, the princess informs him that it is entirely imperative for the ultimate success of his mission. The Zohar HaKadosh teaches that no good desire is ever lost, even those which do not seem to materialize in concrete action. Freeing the lost princess of passion demands that we yearn for closeness with the Master of the world and for the state of holiness and purity which serves as the meeting point between man and His Creator. It requires us to consciously foster unbearable pangs of longing to be close to Hashem, repair the breaches in our relationship, and return to His loving arms in health, holiness, and joy. The simple yearning of a Jew for his Source is, itself, a remarkably precious thing to the Master of the world.

But there is a deeper level here as well. Although there seems to be no clear link between the viceroy’s yearning and the success of his mission, this task of the inner tzaddik is a major part of the process of freeing the princess of inner passion as, in a hidden way, it begins to utilize her powers for the ultimate pursuit of good once again. The viceroy’s passionate yearning to free the princess serves as the very foundation for the delicate process of her complete return to the pursuit of holiness. Like fine sand quietly slipping from one half of an hourglass to the other, the passion of the lost princess is transferred back to the realm of holiness. The stronger the viceroy’s yearning grows for the princess over the year he spends in this place, the more of her holy fire he extricates from the realm of evil and returns to its intended purpose, until, when the year reaches its end, her essence will have been completely transferred, leaving only the purely practical task of bringing her back to the palace.

“Whenever you are unoccupied, you must only yearn, seek, and look forward to freeing me.”

The main obstacle to the avodah of ga’aguim, yearning for holiness, is our lack of faith in its power. Unaware of the tangible benefits gained by merely expressing our desire for closeness with Hashem, we see it as being a waste of time and energy. In fact, this couldn’t be further from the truth. The tzaddikim teach that while the yetzer hara has the license to steal every last bit of holiness and purity from a person’s life, there is one element he is never allowed to touch, and that is the Jew’s desire for holiness. Even if a Jew were to fall into the darkest, most filthy pit of distance from Hashem, he still has the ability to desire closeness with Him once more. Even when a Jew feels trapped by the bonds of addiction, possessed by a force intent on destroying every last vestige of his connection to spirituality, he forever maintains his capacity to yearn for the holiness he is so distant from. A person’s faculty of desire is the loftiest part of his being. While we emote from the six emotional Sefiros which manifest in the heart, and think from the three intellectual Sefiros which are revealed in the mind, the headquarters for ratzon, desire, is sourced in the uppermost Sefirah of Keser which transcends the haphazard structures of negative actions, words, and thoughts to portray a shining blueprint for spiritual, emotional, intellectual, and physical health. Regardless of how miserably wrong things may have gone in his life, the Keser– ratzon of a Jew is absolutely indestructible and holds the ever-present power necessary to realign himself with his mission.

The princess tells the viceroy “Whenever you are unoccupied”, whenever you manage to lift your head above the ocean of vanity that seeks to drown you and snuff out your relationship with the Master of the world, “you must only yearn, seek, and look forward to freeing me” – you can always access your innermost desire, the blueprint of who you truly are, what you truly want, and how you can again pick up the broken pieces of your life and strive to form the image that dances, elusively, before your tear-filled eyes. Even when all other lanes seem closed, yearning for holiness (or even yearning to yearn, and so on, ad infinitum) remains an ever-accessible method of serving Hashem in each situation and can succeed in refreshing your deepest goals and your ability to reach them.

“And you must also fast.”

Eating is one of the most physical activities we engage in. There is hardly anything so egotistical as taking physical items and consuming them so that they become a part of our own physicality. The very act of eating reinforces our physical identity and increases our corporeal mass, further strengthening the material bonds which trap the soul in this world. An excessive fixation on food and eating can shift one’s focus away from spirituality to the point that one loses touch with his soul’s mission in the world, as the verse states “you should not eat and be satiated… and forget Hashem your God” (Devarim 8:12,14)  Although, in our holy tradition, eating is not seen as something inherently impure (in fact, the Torah’s guidelines for eating succeed in turning it into an act of sanctity),  there is still a recognized spiritual benefit that can be gained by abstaining from this physical act at the appropriate times.  Fasting on Yom Kippur, for example, enables us to better focus on the spiritual significance of the day. Putting the body to sleep puts us in greater touch with the desires of the soul. Therefore, the lost princess advises the viceroy that if he is to tap into his most lofty desires and holy yearning, he will need to hold himself back from excessive involvement with matters of physicality. It is important to note that the princess doesn’t prescribe specific days or times for fasting. This is because, in our generation, fasting is generally frowned upon for a few reasons, one of which is the fear that it will weaken us and prevent us from serving Hashem through Torah study and prayer. Rather, the princess advises the viceroy to fast (a reference to all forms of separation from corporeal indulgence) at his own discretion, to make boundaries for himself and abstain from physicality in a healthy, balanced way. This separation from a consuming involvement with the body and its desires will enable him to focus on his yearning for the princess and his overwhelming desire to free her, at last.

“Then, on the last day of the year, you must fast and go without sleep for the entire twenty-four-hour period.”

There is nothing the yetzer hara despises more than when a Jew manages to complete a matter of holiness. He doesn’t protest when we set out to learn a new masechta of Gemara, or any other project in avodas Hashem. It is only when it comes to finishing that masechta or reaching our goal that he invests tremendous effort into attempting to stop us. (This is one of the reasons that a siyum is such a joyous occasion.) Since the yetzer hara is so bent on preventing a Jew from attaining his spiritual goals, the final few feet to the finish line are always met with the most fearsome obstacles. Just before his defeat, the evil inclination expends every last bit of effort in attempt to prevent the Jew from completing his goal.

Therefore, the princess warns the viceroy that on the final day of the year of longing, he must put in extra effort to battle the evil forces which are sure to unleash all of their energy to prevent him from freeing her. He must fast on the last day to maintain perfect focus on his goal and remain spiritually awake, never allowing sleep to ruin his awareness of the awesome task at hand. Since eating and sleeping can grant entry to the creeping seductions of the yetzer hara and enable him to ruin the entire plan, the viceroy must steer clear of them on the final day.

That’s all for this time!

Never Give Up–No Matter What They Say!

Who Am I Really? – Rebbe Nachman’s Remedies