Home Stories The Story of Our Lives: The Lost Princess #1
StoriesWatch

The Story of Our Lives: The Lost Princess #1 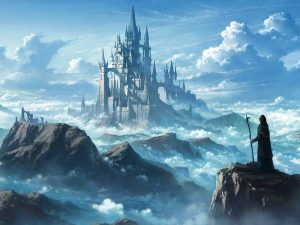 It is my absolute honor and privilege to embark on this journey together with you, my dear readers. In this series, we are going to traverse the marvelous universe contained within the stories of Rebbe Nachman of Breslov (1772-1810). During his short lifetime, Rebbe Nachman produced an entire body of original Torah thought containing a revolutionary worldview which served as a guide to the few hundred chassidim he attracted to his court over his years in the public arena. In the decades and centuries following his lifetime, his worldview of Emunah, simplicity, joy, personal prayer, song, and positivity caught on like wildfire. Bouncing back after almost utter decimation during the Holocaust, the number of those who count themselves as Rebbe Nachman’s followers and admirers continues to grow by leaps and bounds. The number of Jews from across the entire spectrum of orthodoxy who travel to his gravesite to spend Rosh Hashana with their Rebbe who, through his wisdom and guidance, is alive to them as ever before, increases by thousands each year.

This growing interest in the message of a relatively young man from a small backward village in 17th century Ukraine who identified with particularly intense and sheltered sect of Jews bespeaks more than merely spiritual greatness or intellectual brilliance. Everyone you speak to who has been set aflame by the torch of Rebbe Nachman has the same word on their lips: “relevance”.

Even in their original form, many of his teachings can be mistaken for paragraphs out of any one of the millions of self-help books that have published over the last 10 years to help us find comfort in misery, meaning in the bizarre, and joy despite our confusion. Long before Howard Glasser and the Nurtured Heart Approach, Rebbe Nachman was teaching his foundational lessons on the “Nekuda Tova”, the “Drop of goodness” each person contains[1]. Long before it became one of the most common mental illnesses[2], Rebbe Nachman waged a full out war on depression, suggesting various strategies with which to combat it. Long before anyone would dare mention that religion practiced in the improper fashion way could lead to mental illnesses at worst and general misery and dissatisfaction at best, Rebbe Nachman warned against neurotic worship and stressed the need for patience and joy regardless of circumstance; physical, intellectual, or spiritual[3].

Rav Yoel Teitelbaum, the saintly Satmar Rav, once said that of all of the Chassidic Masters, the one who saw until the end of time and revealed the spiritual and emotional remedy for the maladies of that time was Rebbe Nachman of Breslov. Indeed, Rebbe Nachman testified to this himself when he famously declared “My fire will burn until Moshiach will come”[4], a statement whose fulfillment is being witnessed by our generation.

One of the many ways in which Rebbe Nachman was unique from other tzaddikim was his method of teaching. Aside from the classic conveyance of deep psychological understandings and practical life-lessons in the form of Chassidic discourses (which make up his magnum opus “Likutei Moharan”), Rebbe Nachman sought to convey his messages in a radically different form; the telling of original tales. A favorite educational tool used by the Baal Shem Tov and the masters who succeeded him, storytelling had always been a part of the Chassidic tradition, but Rebbe Nachman’s tales were an altogether different story (pun intended). These weren’t mere parables or whimsical accounts of miraculous salvation brought about by the incantations of this or that Tzaddik. Rebbe Nachman’s tales were a universe onto themselves: entire structures of epic drama from which both the deepest insight into the spirituality underlying human nature and the most esoteric secrets of Kabbalah regarding the spirituality underlying the physical realm could be discerned. Rebbe Nachman’s stories are viewed as classics of world literature and are widely read for their entertainment value. However, largely overlooked is the guidance toward an inspired existence that peeks from behind each and every word.

Though the moral and spiritual lessons that emerge from his tales are many, it is the body of Kabbalistic thought concealed within that was undoubtedly the primary focus of Rebbe Nachman’s storytelling. The tzaddikim have revealed that for many of the spiritually ill, it is only the Godliness conveyed through the teachings of kabbalah that can provide the proper tikkun, the necessary healing. Transported by the lofty concepts contained in the words, the great spiritual light illuminates the deepest and darknets recesses of their souls. Still, not every mind is capable of comprehending these transcendent concepts and not every heart is an appropriate vessel for the light.

To bypass this obstacle, Rebbe Nachman veiled these ideas in what appear to be simply amusing stories with universal appeal. This way, whether or not the listener is aware, the deepest light of the Torah is sneaking past the guards in disguise, reaching his heart safely and providing him with the cure to his maladies.[5]  After revealing his first tale, Rebbe Nachman declared: “The world tells stories to put people to sleep. I tell stories to wake people up.”

We will leave decoding the mysteries of these stories to the kabbalists. Together, we will study the first of the Thirteen Tales of Rebbe Nachman, entitled “The Lost Princess” and attempt to extract some of the remarkable advice and encouragement that emerges from this epic story. We will be stunned at how soon we begin to see the story of our personal journeys reflected in the epic search of the viceroy. We will be amazed to find that although he was speaking to all Jews until the end of time, Rebbe Nachman seemed to have each of us in mind.

To close with a few words from Elie Weisel:

“His (Rebbe Nachman’s) tales? Each contains many others. Imagine a series of concentric circles whose fixed centers are buried in man’s innermost being: the I inside the I, conscience become silence and peace, memory inside memory. And all are inhabited by princes and sages. By haunted creatures seeing one another, one in another. By survivors of calamities, refugees, fugitives, messengers and innocent children, orphans and beggars endlessly roaming the world only to meet again in a cave or in a palace, reunited and fulfilled in ways that go beyond the experience they have gone through or have been subjected to, perhaps unwittingly. Following them, we plunge into the supernatural and yet the word miracle is never pronounced. For in the Breslover’s universe, everything is miraculous, even the most common event. On his lips, the most deprived, most primitive of men are endowed with powers; his objects have the gift of song, just as his forests, his trees, his animals and his morning breezes all have the gift of laughter.

Rebbe Nachman is more concerned with man than with mankind. Because he reacts more directly to the individual. His relationship to earth and heaven is filled with as many secrets as are contained by earth and heaven. Rebbe Nachman tightens the episodic events and lets the canvas flutter because he prefers the moments to years, the infinitely small to the infinitely large, the jolts of a life to a lifetime without surprises…

Uman for Women with BRI

The miracles of Purim and now again in...