What Women Seek in Uman

We’ve all heard about the tens of thousands of men who fly to Uman for Rosh HaShanah; many of us know someone who goes every year. What’s less well known is that each year an estimated 10,000 to 15,000 women make the same journey. They don’t go for Rosh HaShanah; Breslov rabbanim are outspoken about women not traveling to Uman for Rosh HaShanah due to tzniyus concerns. But throughout the year they come. Like their male counterparts, these women come from all over the world, and from every color and stripe of the Jewish world. What draws them? What do they find when they get there? And why has Tu B’Av become known in recent years as the “Rosh HaShanah for women” in Uman, with well over 1,000 women making the pilgrimage? Some women travel to Uman because they are in need of a particular yeshuah (salvation) and have heard it’s the place to go. For others the trip is an extension of their spiritual life and the study of Rebbe Nachman’s life and works. Some women are encouraged to go by husbands who find yearly inspiration from spending Rosh HaShanah there. And for yet others the reasons are unclear, sometimes even to themselves. During one of my visits to Uman, a woman in tight jeans and long, painted nails turned to me and asked, “Do you know why I’m here?” “No,” I answered, expecting her to tell me. “Neither do I. A few months ago, I felt like I needed to start saying Tehillim regularly. Then I felt like I needed to come here. I thought maybe you could explain it to me.” I couldn’t, but in time she’ll probably discover the answer for herself.

I grew up in a non-Orthodox family, but my father was raised in a chassidic home. He didn’t pass on much from his childhood to me, except stories of the Baal Shem Tov. While my peers focused on superheroes, I dreamed about the Baal Shem Tov. Those images were part of the process that brought me to Torah as a young adult. One Friday afternoon in 1998, just hours before Shabbos, a friend asked if, early the following week, I would go with her and a few other friends to Uman and Mezibuzh. With no idea where the money would come from, my “yes” was instantaneous. Was this my opportunity to jump on the Baal Shem Tov’s wagon and travel off into the night? While my dreams remained lofty, the trip was a rather bumpy ride. We arrived in Uman late at night, exhausted, and were taken to the home of some locals in a huge apartment building that smelled of gasoline, dust, and foreign foods. I just wanted to sleep, but my friends were going to the kever, and I wasn’t going to stay alone. I walked to the kever, part of me expecting a life-altering experience, and part of me wondering how long it would take before my friends would be ready to return to the apartment. I stumbled my way through some prayers until the first woman headed back. We spent four days in Uman, and I’d never before had so much time with nothing to do but daven. Shacharis, Tehillim, personal prayer, Tehillim, Minchah, Shir HaShirim, Maariv. At the time, my father was seriously ill, and my brother was drifting further and further from Yiddishkeit. I prayed for them and others, as well as for myself to find a husband. I compelled myself to sit at the kever and daven, hour after hour, day after day. At moments I felt some connection, but most of my tefillos felt forced. From Uman we visited Breslov, where Rebbe Nachman’s primary disciple, Reb Nosson, is buried atop a hill overlooking a wide river and surrounded by fields of wildflowers. Old, intricately carved headstones peeked up among the greenery. I felt the disorientation I’d had in Uman fading. Then we headed for Mezibuzh, arriving in the magical town of the Baal Shem Tov at twilight, and spending that night at his kever. Only after returning home did I grasp what I felt had really transpired in Uman. I told a friend that Rebbe Nachman had taken a sledgehammer and smashed the klipos, the outer shells surrounding my neshamah. Parts of me that had formerly felt comfortable had cracked and were no longer part of me. When we reached the Baal Shem Tov, I felt light seeping in between the cracks, giving me the strength and courage I needed to start peeling off the unneeded and unholy things that had been part of me for so long. Within that year my father, may he live until 120, recovered; my brother shaved off his ponytail, leaving only peyos; and I married a Breslover. Since then I’ve been back to Uman umpteen times. The connection I feel there is so deep it’s hard to describe. I’ve had the honor of leading many groups of women to Uman, each trip and each woman unique. These ladies span the spectrum in every way possible, but to me they’re all beautiful. I’ve witnessed their souls blossom.

A Change of Body, Heart, and Soul

Better than Flowers or Jewelry

Rabbi Lazer Brody, a student of Rabbi Shalom Arush, and the translator of Rabbi Arush’s Garden of Emunah, is also a big supporter of women’s trips to Uman. “The greatest gift a husband can give his wife is to send her to Uman,” he says. “When a man gives his wife flowers, or even jewelry, he acknowledges her importance in his life. When a man gives his wife a ticket to Uman, he acknowledges that she is a soul with her own spiritual needs and desires that should be attended to. How much time and money does a woman invest in her home and taking care of her body? Her soul needs attention too! “Personally, I found it to be wonderful for my shalom bayis. I am glad I sent my wife and daughter, and have seen long-term changes in them since their return. They feel more joy and life in their Yiddishkeit, and feel more connected to the Torah and stories of the tzaddikim. Yes, a woman is connected to the spiritual accomplishments of her husband, and ultimately her spirituality is found at home, but a trip to Uman can be the ‘recharge’ that helps her connect to her role in life. A woman, by the nature of her life’s roles, is deeply immersed in physicality. A trip to kivrei tzaddikim is a chance for her to recharge, then come home and elevate that physicality instead of sinking in it!” Leah Hartman of Jerusalem was one of the women encouraged by her husband to go. “My husband has traveled annually to Uman for fifteen years; I waited for many years after we married to go — I was afraid I just wouldn’t connect. I’ve only been once. I can’t explain it still to this day, but once there it was hard for me to leave the tziyun even to go rest. My prayer flowed in a way I’ve never experienced before — for hours and hours. I believe this is partly something general about prayer at the grave of a tzaddik, as I’ve experienced something similar in Meron by Rabi Shimon bar Yochai, and partly something particular about Rebbe Nachman’s kever — but it’s definitely not something I get with my head or can explain logically.

In recent years, Tu B’Av, known as an auspicious day to pray to find one’s mate, has become the occasion for a large number of single women to make their way to Uman. In his lifetime, Rebbe Nachman alluded to his powers as a shadchan (Chayei Moharan 84) and as stories of shidduchim that came quickly after these trips make their rounds, more and more come. Well-known singer Miri Or performs for religious women worldwide, yet enjoys her yearly Tu B’Av performance in Uman the most. “Nowhere else can I look out into the audience and see a lady with a tichel standing next to another with long, bleached curls, arm in arm with a dark-skinned woman in a hat, next to another with a trim sheitel, holding hands with a woman with more earrings than I can count … Yet they’re all rocking and singing together. The powerful connection opens all our hearts and we all cry out to Hashem together. What could be greater? These women know they can come to Uman as they are, and will be seen for their neshamos — and truly, you can see their neshamos shining!” Last Tu B’Av, on the evening following Miri’s performance, the chef turned on music in the dining hall as women were finishing their meal, and within moments, tables were pushed aside and joyous dancing broke out. All boundaries between young and old, frum and not-yet frum, Ashkenazic and Sephardic, completely disappeared. The singing and dancing were so powerful that a few women were crying and praying unabashedly. Comforts Too When groups of women began traveling to Uman about twenty years ago, the physical conditions were dismal. Rabbanit Marcelle described her first trip to Uman. They flew from Israel to Romania, to Moscow, and from there to Odessa. There were no kosher meals on the flights, and the food they’d brought was confiscated by customs officials. When they arrived in Odessa, all the suitcases were thrown into a big pile on the floor, with travelers expected to dig through them to find their belongings. They traveled four hours in an old dilapidated bus to Uman, checked into a dirty, smelly hotel, and went to the tziyun, at that time just a spot marked on the ground, against the wall of the home of a non-Jewish woman. Until about nine years ago, visitors to Uman stayed mostly in the apartments of the local residents, their owners vacating them for the duration for $3 to $5 a bed per night. The kitchens weren’t kosher, of course; visitors ate canned food and crackers. The water ran for only a short time in the morning and in the evening. Bathtubs were filled, buckets used to flush toilets. If more water was needed, a manual pump was outside. Conditions today have improved dramatically. Beautifully renovated houses and apartments are available to rent for $25 to $50 per bed per night. Two restaurants have opened this year, and plans for a luxury hotel are under way. Most visitors fly into Kiev’s Borispol Airport and make the two-and-a-half hour drive to Uman in modern buses or taxis. I’ve heard a helicopter can be rented for $500 a day, and that could shorten the trip to half an hour. There’s a modern supermarket, and even a mall. Travel companies provide meals on par with fine hotels. There are enclosed areas for both men and women to pray with heating and air-conditioning, as the season demands. It’s no longer physically difficult to obtain this spiritual experience. When I asked the guides if they’d had travelers who were disappointed by their Uman experience, they could think of very few. Even those ladies who didn’t have the experience they were hoping for found, when they returned home, that many of their prayers had been answered, and their lives had been changed. 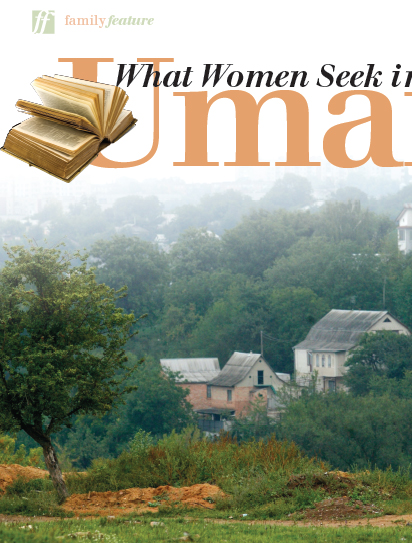 A Better Way Deal with Insults and Humiliation

Get Rid of Depression (But Keep Your Broken...

Hanging Laundry in the Rain

What a beautiful article!
I’m totally inspired to visit Uman. When is Reb. Golshevsky going next???

The Real Power of Positive Thinking

Parshat Vayishlach: Do You Have Enough?