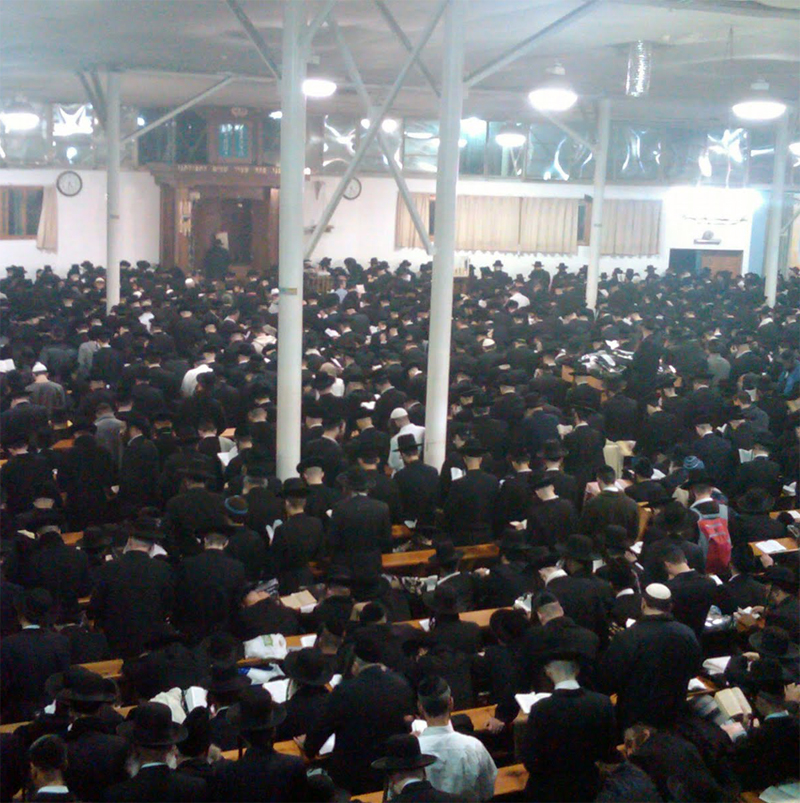 Rebbe Nachman encouraged his followers to recite the Tikkunei Zohar as well as additional prayers and supplications during the month of Elul. It is also customary to remain in the synagogue and Beit Medrash to learn Torah later than usual at night. Rebbe Nachman said, “The niggun with which the Tikkunei Zohar is recited, and the strain and fatigue produced by staying late in the Beis Medrash, are all made into great and lofty things on high” (Sichos haRan 294).

However, not everyone can do this. Once, while recovering from surgery, Rabbi Elazar Kenig mentioned that he hoped to complete the Rebbe’s Sippurei Ma’asiyos before Rosh Hashanah. This is an example of how we must adjust our goals to our abilities and circumstances at every stage of life, and how more modest avodahs are also meaningful.

Breslover Chassidim recite Psalm 27 (LeDovid HaShem Ori) immediately after Tachanun, or after Shemoneh Esreh when there is no Tachanun, prior to Kaddish. This seems to have been a regional custom, which is also observed by the Chassidim of Chernobyl/Skver.

Reb Noson darshans on the common custom to sound the Shofar every day at the end of Shacharit from Rosh Chodesh Elul until Erev Rosh Hashanah (See Likkutei Halakhos, Birkhas ha?Re’ah5:18).

It is customary to recite additional Tehillim during Elul and the Ten Days of Repentance. (Likkutei Moharan II, 73. According to the mesorah of Chabad/Lubavitch, this also was the custom of the Baal Shem Tov, who would recite three chapters a day until Yom Kippur, when he would finish the rest of Tehillim; cf. Sefer Minhagim?Chabad, Elul, p. 54 ff. citing Kovetz Mikhtavim leTehillim, p. 207. Matteh Ephraim 581:8 cites the widespread custom of reciting ten chapters per day beginning on Rosh Chodesh Elul, so that one completes Sefer Tehillim twice before Rosh Hashanah, and one more time during the Aseres Yemei Teshuvah; similarly Rabbi Chaim Elazar Spira of Munkatch, Darkhei Chaim viShalom, Chodesh Elul, 687.)

Selichot for Ashkenazim follow the Polish minhag. As the Shulchan Arukh stipulates, they are recited on the days prior to Rosh Hashanah, and throughout the Aseret Yemei Teshuvah until Erev Yom Kippur.

In the passages that begin E-l Melekh yoshev… the nusach of the ARI zal is say u’mitnaheg bachassidut, adding the connecting letter vav, rather than “mitnaheg,” as in most printed texts. When asked about this custom, Rabbi Elazar Kenig replied, “It is not a difficult thing to do, and it does not require a kabbalistic kavanah[which might be beyond the ken of the average person] ? so why not do it?” His answer reflects a general rule regarding the ARIzal’s customs. (See Rabbi Chaim Vital, Pri Etz Chaim, Sha’ar haSelichos 8, citing Zohar III, 228a, and Tikkunei Zohar, Hakdamah, 11c. Cf. Siddur ARI Rav Shabbsai; Likkutei MaHaRiCH III, p. 601; Sefer Minhagim?Chabad, et al.)

The ARI zal recited vidui only once during selichot (although he did not omit the paragraphs between the other two repetitions ofvidui), while the more common minhag is to recite it three times. Rabbi Elazar Kenig remarked that most Breslovers probably follow the common minhag, adding “and for some of us, that’s still not enough!” He explained that each time we recite the vidui, we should do so with greater sincerity. (For the custom of the ARI, see Rabbi Chaim Vital, Pri Etz Chaim, Sha’ar haSelichot 8 [end]; similarly the GRA, cited in Sha’arei Rachamim; Rabbi Chaim Elazar Spira of Munkatch, Darkhei Chaim viShalom, Chodesh Elul, 703;Sefer Minhagim?Chabad, et al. Re. the threefold recitation of vidui,see Likkutei MaHaRiCH III, p. 602, citing the Baal haRokeach, Minhagim, and Levush; also see the Butchatcher Rov, Eishel Avraham, Orach Chaim 581.)

The twentieth of Elul is the Yahrtzeit of Rabbi Avraham Sternhartz (1862-1955), grandson of the Tcheriner Rav, great-grandson of Reb Noson, and teacher of numerous Breslover Gedolim. An orphan, Reb Avraham was raised by the Tcheriner Rov, and during his youth met all of the living talmidim of Reb Noson, including Reb Moshe Breslover. He was Baal Mussaf and Baal Tokei’a for many decades in Uman, and served as Rav of Kremenchug until he escaped the U.S.S.R. at the height of the Stalinist purges, arriving in Yerushalayim in 1936. Reb Avraham immediately became a key figure in the Yerushalayim community, attracting many talmidim, and soon established the Rosh Hashanah kibbutz in Meron. After his histalkut in 1955, his disciple, Rabbi Gedalia Kenig devoted himself to carrying on his revered teacher’s legacy.

In Eretz Yisrael, se’udot are held in Reb Avraham’s honor on the evening of Khof Elul. During the afternoon, many Breslover Chassidim travel to the Har Menuchot Cemetery in Yerushalayim to recite Tehillim and pray beside Reb Avraham’s kever. Outside of Israel, many Breslover Chassidim also light a candle, givetzedakah, share a se’udoh in his honor, and learn some of his teachings from Tovot Zichronot, etc.

(After Reb Avraham passed away, Rabbi Gedaliah Kenig published his teacher’s Tovot Zichronot, Breslover teachingsrelated to the first ten lessons in Likkutei Moharan, together with the Tcheriner Rov’s Yerach haEisanim, chiddushim on Likkutei Moharan related to Rosh Hashanah, and Reb Avraham’s Imrot Tehorot on the importance of traveling to tzaddikim, particularly Rabbi Nachman, for Rosh Hashanah. Some of Reb Avraham’s letters were published by Reb Noson Zvi Kenig of Bnei Brak asRinat Tzion. A scholarly biography of Reb Avraham is being prepared for publication in the near future by Rabbi Nachman Burshteyn of Jerusalem.)