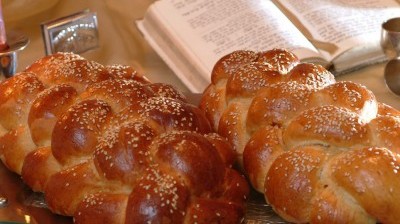 Passover’s over, and we’re all looking forward to eating Challah this Shabbat.

Why does chametz—leavened grain such as bread—become permissible to eat after Passover?

By the time Passover arrives, we ‘re in a chametz-free frenzy. We’re taught that chametz is likened to anger or arrogance; it’s all puffed-up with itself. We’re also taught that chametz symbolizes sadness and depression. Considering a Jew is supposed to be gentle and forgiving, humble and happy, how come we’re allowed to eat it at all?

The holy Zohar tells us that the reason we’re allowed to eat chametz the rest of the year is because eating unleavened matzah during Passover heals us. After this healing intensive, we’re able to once again spiritually digest leavened grains.

Why Is This Digestion Different From Other Digestion?

During the process of digestion, we assimilate the useful matter in our food and transform it. It literally becomes a part of us, in the form of blood cells, bone, and fat. Through the acts of chewing, swallowing, and so on, we engage in a kind of unconscious alchemy.

After we digest our food we also utilize the energy (calories) in the food. We need this energy to do good deeds and mitzvot, such as smiling at someone, speaking words of encouragement, and praying. When we do *mitzvot with this energy we are using the material to fuel the spiritual.

There are even more overtly-spiritual components of eating and digesting. When we say a blessing over the food we eat before we eat it, we are able to uplift the material matter in the food and rectify it on a spiritual level. Our act of eating becomes holy.

Reb Nosson, Rebbe Nachman of Breslov’s leading student, points out that there are *ten mitzvot we observe in the making of bread, which correspond to the ten types of soul-healing song contained in *Tikkun Haklali. “These ten melodies,” says Reb Nosson, “constitute the paradigm of simcha (joy).”

After the profound healing of Passover, we once again have the necessary spiritual strength we need to elevate our eating of chametz to joy. We are especially sure to eat bread on all our most joyful occasions including Shabbat, holidays, and weddings.

What About The Crumbs?

We are taught not to destroy or waste anything, especially food. A Jew is very careful not to waste bread to such extent that many people even collect and eat the crumbs.

In Torah, bread is preeminent among foods. We’re taught to treat it with great respect. We don’t throw out bread (unless it’s moldy), and never toss a sandwich over to a friend.

The holy Zohar teaches that every species in the vegetable kingdom has its own overseeing angel.

Bread takes a lot of work to make. When we take grain, and perform the ten mitzvot associated with growing it (harvesting it, threshing it, grinding it, leavening it, forming it into loaves and baking it, and of course, saying the ten-word blessing over it), we are, in a way, partnering with Hashem in creating our material and spiritual sustenance.

Unlike other nations, the Jewish people don’t have an angel. We’re under the direct supervision of Hashem.  When we make a bris, light Shabbat candles, make (and take) Challah, pray, sing a holy melody, and so on, we take the raw material Hashem created (our soul and body) and turn it into something more—a mensch, a person of character, a person capable of living with true joy.

Based on Reb Nosson’s Likutey Halachot, including the English translation and commentary in The Water Castle by Rabbi Dovid Sears.

*Mitvzot are the commandments of the Torah and are explicit good deeds—actions Hashem has given us to do which help us connect to Him. When we choose to do mitzvot we reaffirm our awareness of Hashem and the spiritual nature of our deep, true self and experience joy.

* Ten mitzvot observed in making bread:  Don’t plow with an ox and donkey together, don’t plant a mixture of seeds, leave the gleanings for the poor, also, leave the forgotten bundle of wheat, as well as the corner of the field, don’t muzzle an animal on the threshing floor, be sure to give the Kohen his Teruma; give Maaser to the Levi, take the second tithe, give Challah to the Kohen.

*These ten types of song can be found in Tikkun Haklali, the general, complete remedy which contains ten specific psalms as revealed by Rebbe Nachman.

Challah photo courtesy of Tamar Ansh, A Taste of Challah